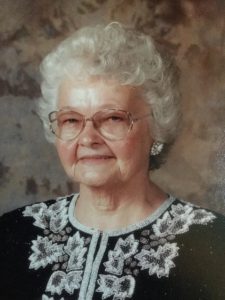 GLASGOW – Martha M. “Jeannie” Spears, age 95, died Thursday, October 31, 2019, at the Barren County Nursing & Rehab. Born in Louisville, she was the daughter of the late Charles Marvin and Jasper Smith Miller. She was a Cartographer at Army Map service. After retiring she, moved to Metcalfe County where she was very active in the community including the Barn Lot Theater, Chamber of Commerce, Metcalfe County Library, Metcalfe County Historical Society, and she was well known for her artwork.

In addition to her parents, she was preceded in death by a brother, Garland Miller, and two sisters, Louise Boston and Joel Squires.

Alternate expressions of sympathy can be made in the form of memorial contributions to the Alzheimer’s Association, or any of the organization that she was very active.