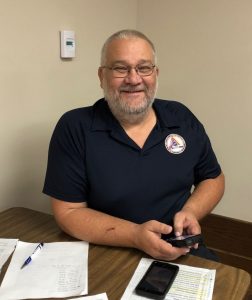 The contract was finally signed for the State Homeland Security Grant in the amount of $69,150 which was approved last October. North Metcalfe Fire Chief Gary Fancher explained, “That is the repeater grant for the six repeaters. That’s three for law enforcement and there’ll be one at each of the tower sites, one at Summer Shade, one at the Greensburg Road site, and one on the north end at the site down there.”

Fancher stated that Metcalfe County was also awarded the Homeland Security Grant which was applied for this year in the amount of $39,855. That grant is to be used for the purchase of Mobile Data Terminals (MDT) the mobile computers used in the first response vehicles. “That’s still a little bit down the road before we get anything back on that,” noted Fancher.

Solid Waste Coordinator Scotty Mosby presented a request for a 24’ x 60’ shed to be built on the back of the Metcalfe County Recycling Center for the purpose of storing cardboard. The shed would hold almost four loads.

“The main reason I want this is…by holding off selling I gain $15 a ton. This gives me more marketing ability if I have that to store this in…I can get more for it,” explained Mosby who added that it would pay for itself pretty quickly.

Mosby has already gathered one estimate of $9,800 for the project. Magistrates Ronnie Miller and Kenny Scott asked that another one or two estimates be collected before any action is taken.

“We’re growing out there! This is the biggest thing, we’re growing,” exclaimed Mosby who is looking at applying for a grant next year to purchase a shredder for the plastics. Stating that if he can shred the plastic he can get a good price for it.

The Edmonton-Metcalfe County Industrial Development Association closed out the 2019 fiscal year with $13,277.72 which the fiscal court approved to be transferred over and added to the 2020 fiscal year’s budget amount of $102,000. The money is budgeted to pay on the spec building loan. “This is money that comes to us through TVA through the Department of Local Government,” noted Judge/Executive Harold Stilts.

The Metcalfe County Public Library’s quarterly report (July-September) was presented to the magistrates with a total income of $13,322 and total expenditures of $102,466. The library reported a circulation of materials of 14,536.

The court approved the resolution to adopt Jim Griffin as the new building inspector for Metcalfe County. This was necessitated by the disqualification of the previous inspector Carly Fudge.