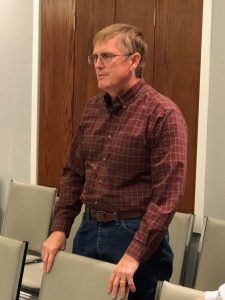 Bruce Sullivan addressed the council asking for water access to his property.

Public Works Superintendent Moe Hensley introduced Metcalfe residents Bruce and Gloria Edwards Sullivan who are requesting water access on the Robert Edwards Road. The couple have lived on her great-grandfather’s farm around 16 years and “The only water the house has ever had is a spring. The spring house is continuing to deteriorate…threatening our steady reliable source of water,” according to Sullivan.

There are three other homeowners on the road who would like access to water. Hensley stated that it is around ¾ of a mile and the engineer will need to look at the access. There was some uncertainty about the price and customer percentage to run the water lines. Hensley estimated the cost of the city installing the water lines to be around $21,000, including engineering costs.

Mayor Doug Smith said, “We need to get together what our protocol is.”

Councilmember Curt Estes stated, “We need to do some additional research on this and see what we usually do on that.”

ABC Administrator Fred Ray stated that all the businesses are in compliance and there are eight days remaining for those businesses to turn in their regulatory fees.

As discussed at the September meeting, Superintendent Hensley advised that repair work on the fire department is due to begin around the first of November after speaking with contractor Kenny Shirley.

Chief Clemmons thanked the mayor and council for repairing the air conditioning at the fire department.