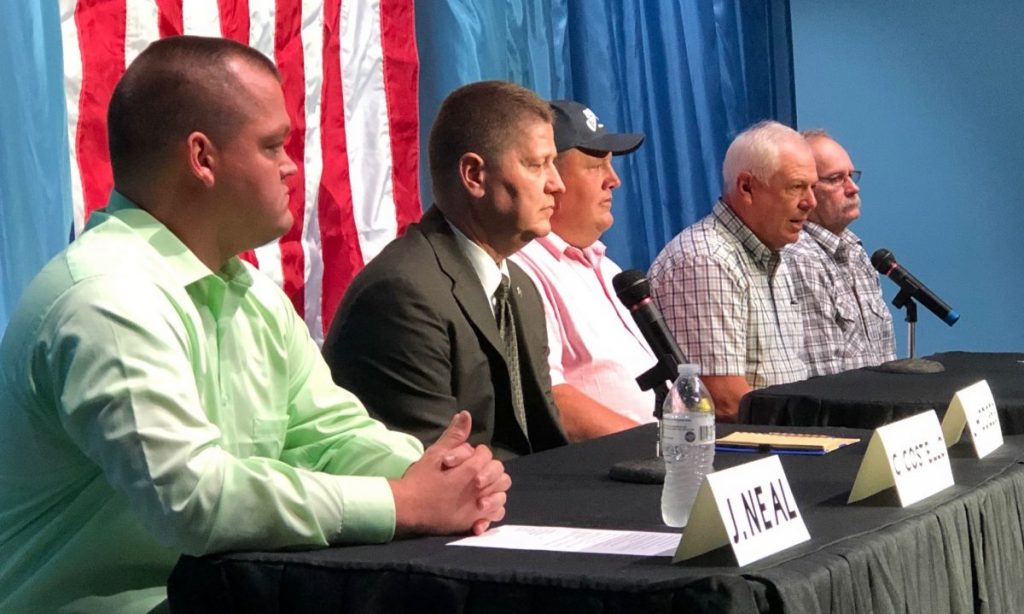 The first sheriff’s candidate debate held in Metcalfe County took place on Thursday night at Barn Lot Theater. The Metcalfe County Young Republicans (MCYR) organized the debate which started off with a bang.

Candidate Charles Costello came out from the backstage room where all the candidates were waiting and began speaking to the audience mere moments before the debate was set to begin and declared he was being harassed backstage and would not tolerate it.

Members of the MCYR TJ Morgan and Daniel Bragg then walked over to Costello to address the complaint.

Costello declared, “This is a setup! You guys set this up! He started it [pointing backstage]. I told you guys from the beginning, I’ve got no problem answering anything.” He then asked repeatedly if Jeff Jobe [owner of Jobe Publishing, Inc.] was in the theater to which they replied, “no.”

“I tell you what you guys do, you best talk to the so-called deputy,” Costello advised Morgan and Bragg.

He was then asked by TJ Morgan if he wanted to participate in the debate to which he answered, “No, I don’t. I will answer any question from any legitimate news organization but this is a setup,” stated Costello as he walked toward the front exit of the theater.

It was unclear to the audience what had happened backstage, but Costello stated that Sheriff Lonnie Hodges had refused to shake his hand.

Once the debate began, candidates were each given two minutes to answer each question in turn. They were asked why they wished to become sheriff, the sheriff’s role in the community, if they believe they possess the stamina required to do the job and what or if they would require a training program in their office. Here were the replies.

Lonnie Hodges answered, “Absolutely! I started out as a soldier in the United States Army…I’ve had my metal tested for 20 years as a road trooper. When we look to hire deputies…we want people that will take care of business.”

“Yes sir, I’d be prepared at all times 24/7… if an emergency’s there, somebody’s gotta be on-call, somebody has to be there someway somehow, ” replied Scotty Posey.

“Yes, sir, I would keep a training department for me and my deputies. I would keep deputies on over the weekend,” answered Lacey Cox.

The candidates were then asked how they would select deputies for their department if elected.

Cox stated that he intended to have deputies that would work with honesty and integrity, Bragg said he would have top-notch deputies, Neal intends to hold himself and his deputies to a high standard, and most of the candidates wanted to keep the current deputies if possible.

Hodge’s answer was more detailed, “All deputies in the commonwealth have to be POP certified. They have to go through a physical fitness process, a psychological process, background investigation, and have to complete the states academy in Richmond.”

The candidates were all concerned for the children’s well-being when it comes to school violence and vowed to work with the school systems in any way needed, however, only Hodges had experience working with a mass casualty situation and he said that he believed the schools in Metcalfe County were proactive in creating a school police department. It is worth noting that candidate Neal is a police officer in the school system.

When asked what the number one crime-related issue needing an immediate plan of action in the county is the candidates all agreed “drugs.” It was concluded that drugs are the reason for a major amount of theft and other crimes committed in the county. To cut down on drug would cut down on the amount of crime.

Neal related that he felt the biggest need of the sheriff’s department is vehicles and more drug test kits to be available on-site to verify substances found.

Candidates Posey, Hodges, Bragg, and Cox all agreed that the biggest need of the department is manpower. “We can’t keep going with a 3 or 4 man agency and expect to see any difference made,” stated Hodges. 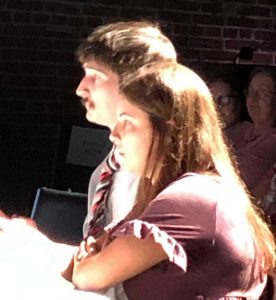 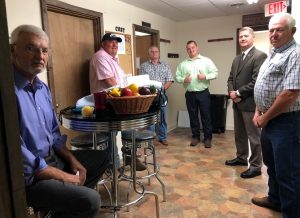