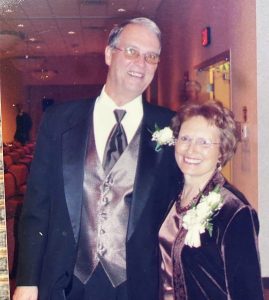 Her diagnosis revealed the worst, a malignant lump. She was 50 years old.

“Mom’s pride and joy was her four boys, and husband, David of 41 years,” said John. Diana, who was born and raised in Fredericton, New Brunswick, Canada moves to Kentucky after she and David married, and his profession as a doctor brought them to Kentucky.

“She liked spending time with friends and family. She liked games like Scrabble and  Bridge, she played tennis and golf and liked snow skiing. Mom was very witty and had a great sense of humor.”

With her family by her side, Diana decided to fight the breast cancer with radiation, and not chemotherapy.

Unfortunately, her battle wasn’t over.

In 2000 the cancer returned in her hip. She took radiation and chemotherapy, and also had surgery.

“The cancer spread to her brain,” John said.

“My mother had a very positive attitude and never gave up,” John said. “She never complained and fought until the end.”

John, who was blessed with his mother’s positive perspective has managed to find a silver lining to a dark cloud that forever  changed the Miller family.

“The cancer affected our family in many ways,” he said.

“Her diagnosis brought us closer together. We valued the time we had together. I was so proud of my father as he cared for my mother through this battle.”

John says that if his mother Diana had it go do again, she would have had a complete mastectomy after the initial diagnosis.