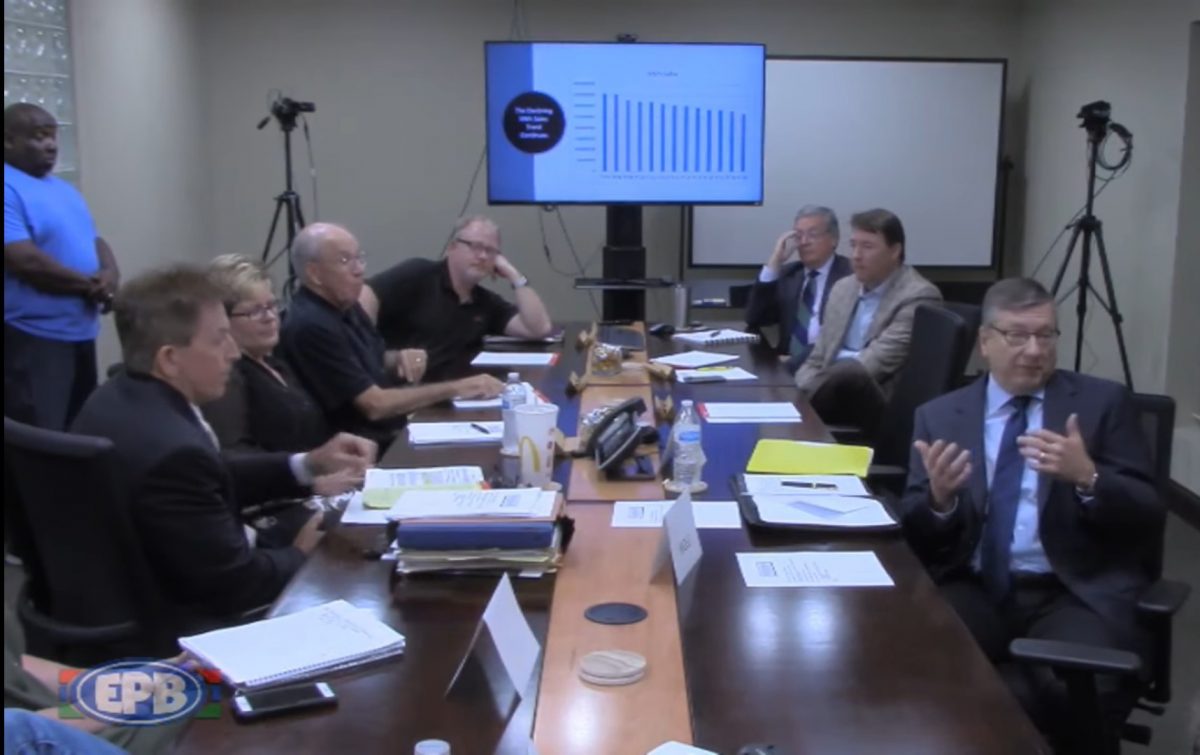 The Board of Directors with Glasgow Electric Plant Board were addressed by dozens of customers voicing out against the potential 20-year rolling contract with the Tennessee Valley Authority. Ernie Peterson, TVA KY District General Manager, far right, explains TVA’s employee bonuses. Behind him is board member Jeff Harned and Superintendent Billy Ray. On the left is board attorney Ron Hampton, and board members Libby Pruitt Short and Marlin Witcher, and Chairman Tag Taylor. Photo/GEPB Video

Board members of the Glasgow Electric Plant Board were met with dozens of concerned customers last week at their board meeting, many of whom voiced their concerns regarding a 20-year rolling contract with the Tennessee Valley Authority (TVA) and the 2020 rate changes.

TVA has proposed to give LPCs, or local power companies, a 3.1% credit to their electric bills among other things. This equates to around $500,000 per year for Glasgow according to EPB Superintendent Billy Ray, but requires the contract to be a lengthy 20-year agreement verses the previous 5-year contracts in recent history.

Board attorney Ron Hampton said he had reviewed the contract and had reached out to TVA for further clarification on vague wording. He said the response he was given was that the contract would most likely not be complete until sometime in November.

Regardless of clarity within the contract and hesitative advice from Hampton, board member Jeff Harned made a motion later in the evening to accept the contract. Chairman Tag Taylor said he wasn’t able to second the motion. It is unclear if Taylor would have seconded the motion and a request for whether he would have via email has not been answered as of press time.

Board member Libby Pruitt Short said she was opposed to signing an agreement before it was complete, stating, “From a business perspective, that’s not smart to sign something that’s not even complete.”

At the beginning of the meeting, board members held discussions with customers who were not happy with the direction EPB was considering in the long-term contract. Additionally, many customers also say their electric costs have become exceedingly high since the rate structure change termed Infotricity that was implemented around four years ago.

Johnny Dilley, an EPB customer for 35 years, spoke with the board at length offering other options EPB could take, which included the potential for Farmers Rural Electric Co-op or other power companies to purchase the municipal utility.

EPB has reported declining sales since 2008 and expects that trend to continue, which they cite as reasons for the increases in the customer charges since they are moving towards a 100% non-volumetric rate. Non-volumetric rate means the cost to a customer is not based on their usage of kWhs but a fixed rate instead. Board members say with more efficient appliances, other sources of power, and industry decline are some of the reasons for the decline in sales.

However, Glasgow EPB is the only power company with TVA that utilizes the rate structure they currently have out of the 154 companies TVA serves.

“We’re the only one that’s ever been put under this rate,” Dilley said, “As a customer, I see that as discrimination.”

Taylor said TVA did not put EPB under Infotricity, instead it was approved by their board at that time.

Dilley asked Ernie Peterson, TVA KY District General Manager, if he worked with Ray in designing the rate. Peterson replied, “Yes, we had to approve that rate.”

Later, Missy Staples, an EPB customer and long time voice against the rate structural changes, asked Peterson why Glasgow chosen for the new rate structure to begin with. Her question was never specifically answered as to why Glasgow was chosen, but Peterson explained it is a “mixed bag” of rate structures.

Dilley said TVA is not the only producer EPB could obtain their power from and he didn’t support locking into a 20-year agreement with TVA.

Taylor said just as with anything else in life, the costs of goods and services rise each year to which Dilley said that generally costs are a market-based competition and as a customer with EPB, “We’re sitting here in a monopoly.”

Chairman Taylor said they only have two options: lowered costs or reliability before comparing Glasgow to a third world country.

“What we’ve found is people are willing to sacrifice price for reliability,” Taylor said, “We wouldn’t want black outs like they have down in Jamaica or some third world country where we have to shut the electricity down because we can’t afford to keep it maintained.”

One customer who was bound to a wheelchair spoke up to reply, “That’s basically what’s happening to the people that can’t afford to pay their electric bills (since the Infotricity implementation).” Another added that customers are forced to make their own blackouts in hope they can lower their electic bills.

Taylor replied, “I get it, but you know, I’d love to have a Ferrari. Can’t afford one. And I get it, but it is the situation that people are in when everything goes up, but income does not do the same.”

Dilley said keeping EPB as it stands today is not viable for the City of Glasgow.

Taylor said one option is to seek for a citywide public referendum to “shut this place down.”

“The entire city would vote on it just like we did in the 1960s when we brought it in; there’s a vote to take it out,” Taylor added.

Dilley, and later board member Marlin Witcher, suggested hiring a rate consultant before signing onto the 20-year TVA agreement. No actions were made to pursue that route yet.

Taylor said that was a valid option, but said they, at this point, are not sure what to ask of a consultant.

When asked by Short, Peterson said “well over” 50% of the companies who had signed the contract had utilized a rate consultant.

Another customer asked, “So this board, as it sits right now, is that we’re not leaving the TVA come hell or high water?” Taylor said it isn’t a choice, but circumstances that they are making those claims.

One reason both Harned and Taylor voiced support to stay with TVA is because transmission lines would have to be built, but that wouldn’t be needed if, for example, Farmers RECC purchased the utility, Dilley said.

Also, Harned and Taylor said they had doubts that anyone would want to purchase EPB due to their $22 million municipal revenue bond debt and $50 million in assets “owned by the citizens of this community.”

Harned also said the problem is the lack of income in Glasgow after Dilley said the U.S. Census Bureau shows home ownership is less than 50% with over half being rental property because homeowners moved out of the city and rented their property out to escape the higher electric costs.

“The same data you’re quoting shows the household income in Glasgow is 47.8-cents on the dollar for the U.S. national average,” Harned said, “That is the problem. We can’t fix that.”

Many people, possibly in the thousands, within the community say the long-term contract will be devastating for the City of Glasgow. However, some EPB board members are adamant that staying with TVA is the best option available for the city’s power service.

The contract is expected to be discussed again at the next board meeting on October 24. Once no action was taken by the board to accept the TVA contract, Ray told the board that they “just cost us $50,000 next week.” The TVA contract would begin the week following the approval.

Board members voted to approve next year’s rate changes after Superintendent Ray gave a slideshow presentation comparing each tariff. He laid out examples for each comparing the average 2019 bill, the average 2020 bill, and the average 2020 bill with the TVA contract if approved. Since there are several tariffs, we will only list the residential and large industrial information.

The amounts below are based on Ray’s comparison chart between the new 2020 rate changes and with the 3.1% savings from the TVA contract:

Large Commercial (GSA3) industries will save an average $656.98 per month if the TVA contract is approved. Without the TVA contract, industrial customers will see a savings of $140.70 per month on their 2020 bills. 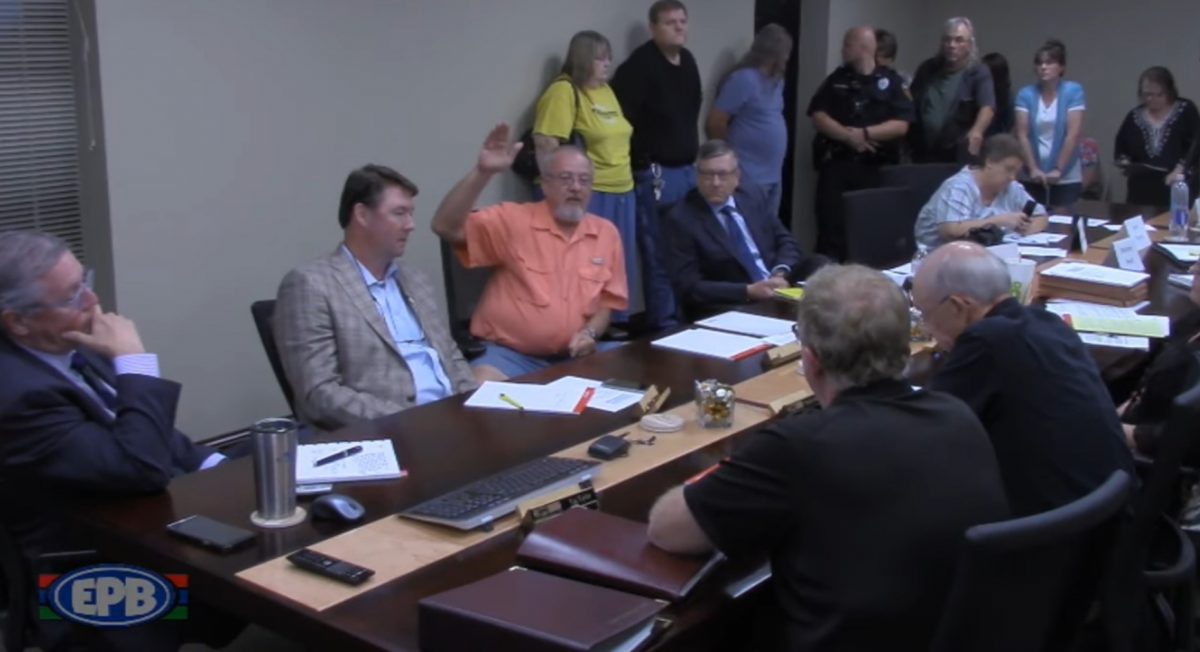 At center with arm raised is Johnny Dilley, decades long EPB customer, told GEPB board that the current path EPB is on is not viable for the City of Glasgow. He further questioned why other options could not be studied. Photo/GEPB Video