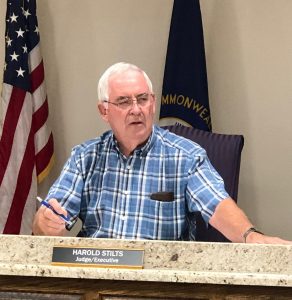 Judge/Executive Harold Stilts noted that there are regulations as to what can be permanently built on the historic courthouse property.

Judge/Executive Harold Stilts relayed that “Due to the court not being able to satisfy Sumitomo on the stage they wanted built in the courthouse yard, I had a discussion with them last week, and they have requested that we give them their donation back.”

After the motion to refund the donation was unanimously approved, Magistrate Ronnie Miller suggested that Sumitomo and other area businesses should all be recognized in some way for the economic value they have given to the county for the last 30 plus years.

A motion was also approved to allow Judge Stilts to negotiate with a client on the rental/lease of the former sheriff’s office building.

The monthly financial statement was presented by Treasurer Vickie Stephens. As of August 30th, the cash balance of all accounts was $2,738,370.92.

Solid Waste Coordinator Scotty Mosby presented copies of the previous county garbage removal ordinance to the magistrates for review. An update of the ordinance has been requested by the state.

Treasurer Stephens advised that the newly purchased Mac truck for the road department will arrive later in the week.

Miller informed the court that he was still working toward getting local citizens and the management of AgRenew to meet at the next fiscal court meeting on September 24th.