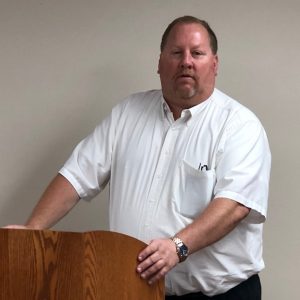 The guest speaker at the Monday, July 22nd fiscal court meeting was Scott Pekar of World Wide Trucking, a business which specializes in trucks for government and municipal use.

Judge/Executive Harold Stilts stated that the trucking company which hauls rock for the county has not been able to keep an adequate supply to the county barn since he works for other individuals as well. To alleviate this problem the county is looking at the possibility of leasing a truck for transporting rock.

The Municipal Rotation Program as explained by Pekar has a goal of minimizing the daily operating costs. There are around 40-50 counties in Kentucky involved in this program with 10-12 additional counties (including Metcalfe) interested in the program.

Pekar explained that municipalities do not pay the 12 percent federal retail excise tax on trucks 33,001 pounds or higher and no state sales tax which gives an 18 percent purchasing price advantage.

There are three parts to each transaction with the Municipal Rotation Program. The first is the new truck sales/bid which is handles by Pekar himself.

The second is financing which is done much of the time through the Kentucky Association of Counties (KACo). They set the vehicle up on an 18-month note with interest-only payments.

The third is the auction company guarantee. “We have been dealing with a company called J.M. Wood Auction Company out of Alabama. They have a 7% fee…once they get their fee anything over that you’re getting 93 cents of every dollar.”

“I’ve been charting this really strong for 20 years. My experience has shown that the counties that have been in it in Alabama and other places, obviously those counties in Kentucky…over time the counties have about broke even.”

Stilts thanked Pekar for presenting the information and advised that they would discuss it further and contact him if they decided to use the program.

Kevin Wilson Dozing was awarded the bid for the Fletcher Road Bridge with a bid of $115,000. The deadline for completion of the work is October 15th.

The court went into closed session for over 30 minutes to discuss personnel issues. Upon returning to open session Stilts recommended adjusting the Equipment Operator pay scale to $16.50, the Maintenance Worker to $16.50, and the Solid Waste Coordinator to $18.77.

The one no vote was cast by Magistrate Ronnie Miller, but the motion passed 4-1. When asked why he voted no, Miller replied, “a difference of opinion.”

Authorization was approved for all magistrates to perform marriage ceremonies per KRS 402.050 during this term of Fiscal Court.

The next scheduled meeting is Tuesday, August 13th at 9 a.m.