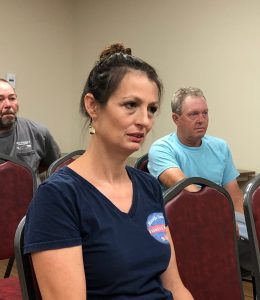 Representing the Metcalfe County Farmers Market Ken Childers once again addressed the July 9th fiscal court asking for them to join the Community Partners Program and help to sponsor the market. He also introduced Market Manager Rose Saltsman to the members.

Childers stated that “we had 198 customers walk through our market on Friday…we had 14 vendors on site…probably 75% of those customers came in with a handful of vouchers to redeem. The farmers market is helping to stimulate the economy in the community and we would certainly hope fiscal court would see fit to help us continue this program and help keep these vouchers funded through this year.”

Childers announced that after the previous fiscal court meeting he met with representatives at TJ Samson who agreed to become a Community Partner which brings the total sponsors to $3,000 leaving only one more sponsor needed to reach their goal of $4,000.

Ronnie Miller asked if the market was part of the Kentucky Proud program to which Childers answered, yes and that a small grant had just been received through Kentucky Proud to fund marketing ads on the radio.

Childers also pointed out that the school system began its own voucher system this year. They printed a thousand dollars’ worth of vouchers and handed those out through their recourse department. “The school system is funding that one in it’s entirely.”

“I know money is really tight. We’ve had some surprises on stuff that wasn’t in our original budget, but I just feel like $1,000 is just not that much,” stated Magistrate Ronnie Miller.

The vote was 2 – 2 with Judge/Executive Harold Stilts casting a yes vote and breaking the tie allowing the funding of the market. The two no votes were cast by Magistrates Kenny Scott and Donnie Smith. When asked, Scott remarked that his no vote was due to tight budget constraints. Smith noted his reason as a difference of opinion.

Two bids were received and opened for work on the Fletcher Road Box Culvert Bridge. One from Kevin Wilson Dozing for $115,000 and the other from Bluegrass & Associates for $124,000. These will be reviewed for specifications and the bid awarded at the next meeting.

The second reading of Ordinance No. 19-0709, amending the Metcalfe County Administrative Code and Employee Policy and Procedure Handbook was approved.

In other business, Miller stated that the odor from the rendering facility, Ag Renew is not being taken care of as promised and had been horrible the past few days. “Those residents down there don’t deserve that. This is awful. I don’t know what steps we need to take, but they either need to fix the problem or leave.”

The co-owner, Matt Gibson and David Dixon from Texpack and Protein Products that did the presentation on May 14th promised to clean up the facility and the air quality.

Scott commented, “So they pretty much just told us what we wanted to hear. That’s what it boils down to.”

Stilts asked if the EPA had been involved in any way and Miller replied that he believed they had been called. The Division of Water is also believed to be involved because of the nearby creek and a backed up sewer.

Miller stated that he was going to the facility to talk to them since he could not get the owners Grant and Matt Gibson to return any of his calls or messages.

Stilts advised Miller to keep working toward a resolution and keep everyone updated.

Due to training, the next fiscal court meeting has been moved to Monday, July 22nd at 9 a.m.