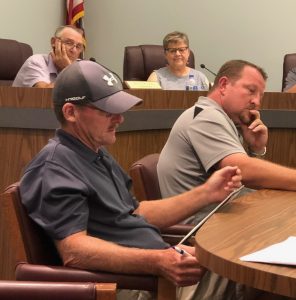 The July 8th meeting of the Edmonton City Council was short and uneventful with everyone in attendance.

Public Works Superintendent Moe Hensley reported that regular maintenance was carried out, samples were taken, and inspections had been done, so it was business as usual in June. He did note that he had gotten cost estimates for a water request on the Robert Edwards Road.

Alcohol Beverage Control Administrator Freddie Ray gave the monthly update on alcohol license and sales stating that “Everybody’s in compliance and I think everybody is collecting the tax.”

The Parks and Recreation Department report was presented by Assistant Director Brian Garrett who reported that little league had ended and the coach pitch tournament is scheduled for July 20th.

Edmonton Fire Chief Jerry Clemmons presented the report for June with a total of 12 runs of which 4 were medical, 3 were fire alarms, 2 were special details, 2 were for downed trees, and 1 house fire.

Dawn Devore added that fire department repair bids were advertised and should be available at the August 5th meeting. No other business was reported.