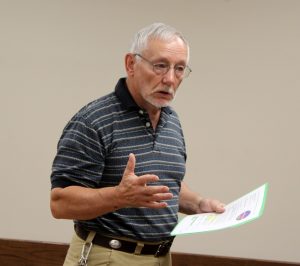 Ken Childers spoke to the members of fiscal court about funding for the Metcalfe County Farmers Market.

Childers asked the fiscal court if they would join the Community Partners Program and assist with funding for the vouchers programs. He explained that the only money taken in by the farmers market is from a small grant (to help with double dollars) and vendor fees which were about $1,800 last year.

The market participates in governments programs which assist families with purchasing fresh fruits and vegetables with WIC, SNAP, the Senior Nutrition Program, and KY Double Dollars. According to Childers, “The numbers that went out through Metcalfe County Farmers Market last year into these families was over 9,000 dollar.

Currently, Edmonton State Bank, the Metcalfe County Schools, and the City of Edmonton are members of the Community Partners Program which began in 2018. Childers also mentioned that he is meeting with TJ Samson Community Hospital later in the week. “What we ask for from our Community Partners is 1,000 dollars. We need about 4,000 dollars a year to run this program.”

Childers also announced that last Friday it was approved to build a brand new farmers market. “The extension board is putting up half the money, the county Ag board is putting up a percentage of it, and we got approved through the governor’s office agriculture policies for the balance.” This fall a new farmers market facility will be built on the site of the community garden and the existing facility will be turned into a culinary classroom for the extension service.

Judge/Executive Harold Stilts asked, “So the people getting these vouchers, are they Metcalfe County residents?” to which Childers replied yes.

A motion made by magistrate Kenny Scott to table the item until the next meeting in order to study it further and carry it over into the next fiscal year [beginning July 1st] passed by a vote of 3-2.

The court approved the engineering/architect firm, MSE of Kentucky, Inc., which was chosen by the Edmonton Metcalfe County Industrial Authority committee for the designing of the cooperage buildings at the South Industrial Park.

The amendment to the Sumitomo Scrap Sales Agreement with Metcalfe County Recycling Center to pick up cardboard and plastic was approved and the court also approved the City of Glasgow Solid Waste Landfill Acceptance Agreement with no changes.

The creation of a Revolving Payroll Fund 2 to contain the Health Reimbursement Account at Edmonton State Bank was approved.

The re-appointment of Dalton Bragg to the Board of Assessment Appeals for a three-year term, and as Chairman for this session was approved.

The magistrates approved the reappointment of County Treasurer Vickie Stephens for a four-year term beginning July 1, 2019.