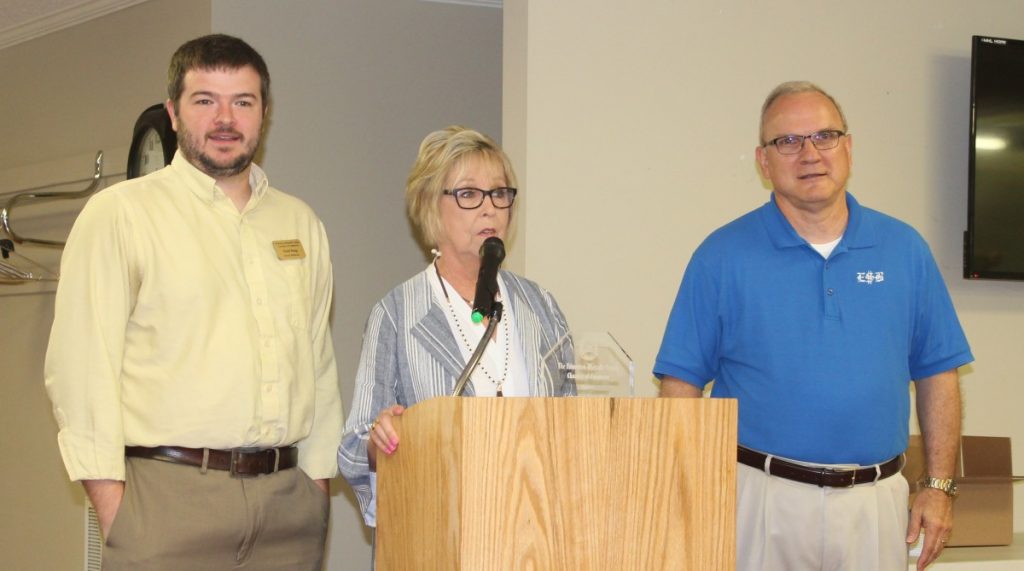 The Edmonton – Metcalfe County Chamber of Commerce held its quarterly breakfast on Tuesday, June 25th at Leftwich Hall in Bowling Park with an agriculture theme.

Chamber President Torrie Osbon presented the Business of the Quarter award to Edmonton State Bank stating, “I don’t think this business has not touched one person in this group. It’s very important to the success of the community, individuals, businesses, school, etc.”

Accepting the award were Daniel Bragg, Howard Garrett, and Freeda Reece who spoke, “Edmonton State Bank has been in existence for 122 years…and we’re still going strong.” Adding that a new building was built in Glasgow, they are adding more options to their online banking, and currently, have locations in five counties.

Next, Osbon noted the many changes to agriculture from tobacco farms and dairies to the newer forms of farming such as hemp. Earth’s Glory representative Jennifer Moonsong spoke to the crowd about the growing hemp industry, its many uses, and outlook for the future.

Moonsong gave a bit of history pointing out that hemp had not been grown as a crop in Kentucky for around 100 years. The world is now relearning that hemp has an array of uses not only in medical but clothing and other products. Moonsong noted that “Kentucky actually was ahead of the curve on this” adding that the crop is still highly regulated.

She explained that although hemp has ‘maximum potential’ the infrastructure to support that potential is not in place yet. “They’re building car parts out of it, which I think is wonderful, but right now there’s only one company and that company started in Louisville and now they have their Louisville plant, South Carolina plant, and they started one in Canada about a year ago.”

Currently, Earth’s Glory is using it for CBD products. The hemp is grown locally, transported to Botanical Processing in Louisville where it goes through CO2 extraction and purification processes five pounds at a time. It takes literally months to process each crop.

“Everyone in the entire company [Earths Glory] is seven people. There’s seven of us from the beginning to the end. That means our chemist that includes our farmers, that includes me, that’s all of us.” She went on to explain that in the future the current farms will more than likely be growing hemp for the large companies and it will be highly regulated by the FDA. Hopefully, this will be more profitable for the farmers and the local economy.

The next guest speaker was Lynn Hawkins, an English and Agriculture teacher, and manager of the Farm to School Program. She along with her husband and three children farm about 1,500 acres, raise 150 acres of tobacco, around 315 head of cattle, and grow hay, corn, and for the first time hemp. She and her daughter also manage a greenhouse.

Hawkins stated that one of the biggest changes that farmer face today is finding workers. In years past, neighbors joined together to harvest each other’s crops and local teens were hired at harvest time. “It’s very difficult for farmers to find quality labor that they can depend on. Farmers that are farming large amounts of acreage like 100 acres of tobacco, without the migrant workers, there is no labor force.”

She did state that she believes that locally grown food is making a comeback and that the farmers market is growing. “We take it for granted but we live in a place where we have the safest, most affordable, most abundant food supply of anywhere in the world and that is something to be very thankful and proud of.”

In closing, Osbon announced that this year the school system received a grant to allowing them to have chicken coops and raise chickens, providing the children with hands-on education along with the established greenhouse programs.

The breakfast was sponsored by Metcalfe Farm Supply and Barney Withers and the delicious food was catered by Diane’s Cakes and Catering. Cash door prizes were also furnished by MFS and won by John Ray Ford and Craig Jennings. The next chamber breakfast will be held sometime in September. 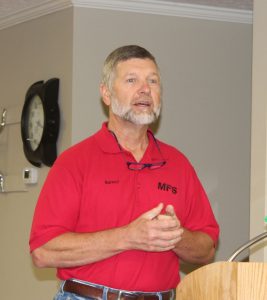 Barney Withers of Metcalfe Farm Supply which sponsored the breakfast. 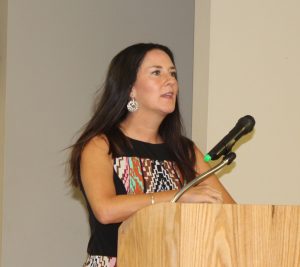 Jennifer Moonsong a representative of Earth’s Glory spoke about hemp production and processing. 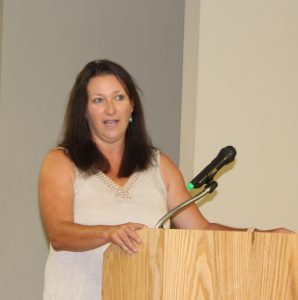