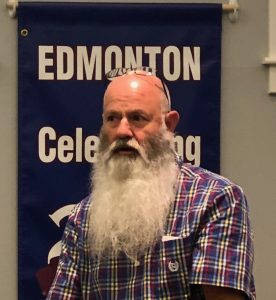 A citizen voicing his concerns that a large water rate increase would cause a hardship to many within the county.

The Edmonton City Council met on Monday, June 3rd with Mayor Doug Smith asking for suggestions on the water project with KIA since no motion was made to hear the second reading of Ordinance #1018-19 11 concerning water rate increases.

Councilmember Curt Estes spoke up, “I suggest that we do 10 and 10 instead of that 20. That’s just too much for one year.” Referring to the ordinances original rate increase amount of 20 percent. Estes went on to question if the 1.5 percent yearly cost of living increase was necessary.

“I’d rather it wasn’t in there,” said Councilmember Faye Word and Estes added, “We ought to wait until the time comes then deal with it then.”

An audience member, referred to only as Jerry, came to the podium and asked, “How much running cash is in the fund or funds that deal with water?”

City Clerk Dawn Devore replied, “In the Edmonton Water Works maintenance fund, the one that we write checks out of for maintenance and upkeep and what is budgeted for every year, there is 1.7 million dollars in there.”

“Is there another fund that is associated with the water?” asked Jerry.

“There are bond funds that are established because we owe money already,” stated Devore explaining that it is required by Rural Development and Arcadia that money be set aside each month for those payments and to cover any maintenance issues to equipment.

“I was brought up that…we saved for a rainy day. I heard that 1.7 and I realize that you’ve got maintenance and budgets and all that but apparently we’re in the rainy day right now. Twenty percent is pretty hefty. It may not affect me much, but there’s a lot of people out in the county, those few bucks does affect them. There’s more than a few folks, get out and drive around the county. There’s people out there hurtin for those few bucks. If there’s any way that you all can bring that down some, ease into it some maybe. If not can you use part of that 1.7 million? Can you spend some of that on your project?”

The council then voted to change Ordinance #2018-19-11 to increase the water rate by 10 percent as of July 1, 2019, and 10 percent as of July 1, 2020, and remove the automatic 1.5 percent yearly cost of living increase option as suggested by Estes. The ordinance was approved by a vote of 4-2 with the no votes being cast by Councilmembers Wayne Wilson and Austin Bragg.

Next, the second reading of Ordinance #2018-19-12 to increase the sewer rate by 10 percent and also remove the automatic 1.5 percent yearly cost of living increase option was brought to vote. That was also approved by a vote of 4-2 with Wilson and Bragg voting no.

Mayor Smith presented his budget outlook for the city beginning with the new industry just announced and hopes that it will decrease the current unemployment rate of 4.2 percent. He also noted that the health insurance premiums are increasing by 3.8 % but workers compensation rates have decreased.

The Public Hearing on the Municipal Road Aid Funds and Local Government Economic Assistance (LGEA) Funds received no comments or correspondence so the FY 2019-2020 Municipal Road Aid Resolution for the amount of $31,981.95 was approved.

An agreement for FY 2019-2020 was approved unanimously to donate $375 to the BRADD Aging Services Program.

The first reading of Ordinance #2018-19-14 – Budget Amendment to include a $25,000 donation from the Edmonton State Bank was approved. The donation was for the purchase of a street truck for the city.

A specially called meeting was held on Friday, June 7th for the purpose of second readings. Council member Teresa Hamlett was not in attendance.

The second reading of Ordinance #2018-19-11 Water Rate Increase was approval by a vote of 3-2 with no votes being cast by Wilson and Bragg.