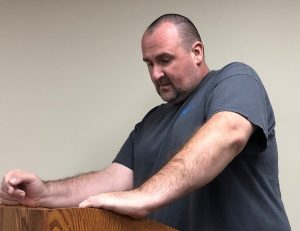 Solid Waste Coordinator Scotty Mosby addressed the court on the subject of illegal dumps within the county. PJ Martin/The Herald-News

The May 28th meeting of the Metcalfe County Fiscal Court convened with all in attendance. Solid Waste Coordinator Scotty Mosby address the court on the subject of illegal dumps within the county. “We’ve got several dumps. They’re scattered everywhere. I’ve got two options.”

The first option is to bid them out (for clean-up) and fill out the grant around October for a 25 percent match. The second option is for the county to clean them up and get full reimbursement. “A lot of these are dump truck loads.”

“I’ve got two big ones, I feel we need to bid out, but the small ones, if we’ve got the help and time… I think it’s just better if we could just go out and do em and get reimbursed.”

Judge/Executive Harold Stilts commented that people from the Columbia EPA office have been in Metcalfe recently identifying dump sites and writing citations.

Mosby asked that anyone spotting a dump, report it to him so that he can look at it and turn it in. No action was taken but Mosby asked that the court keep these options in mind.

Mosby also noted that there are currently three people picking up garbage and they are collection 90-100 bags per day. He also stated that he has a grant out for two more recycle trailers, some smaller buildings, and for advertisement.

Bids were awarded for the annual supplies for fiscal year 2019/20 to the following:

The fiscal court approved the necessary resolution to adopt and approve the Memorandum of Agreement between Metcalfe County Fiscal Court and Kentucky Transportation Cabinet in the amount of $585,000 in discretionary funding for resurfacing six (6) roads which were presented at the last meeting.

The second resolution approves the Kentucky Office of Homeland Security 2019 Grant for a cybersecurity enhancement upgrade for North Metcalfe Volunteer Fire Department MDT’s along with a computer in the amount of $40,000.

Treasurer Vickie Stephens presented an update on the Ambulance Fund Certificates of Deposit. Discussed at the previous meeting was the rolling over of a current CD to a new one. This was determined to not be in the county’s best interest as it would have cost a penalty of $1,600, so it was left as is. That CD had earned $784 interest. However, the transfer of the suggested $500,000 from the Ambulance Fund to a 30-month certificate of deposit was completed. The Ambulance Fund total is $3,079,450.53. 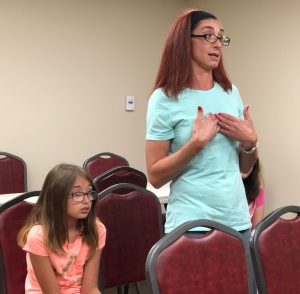 Stephanie Vaughn a resident on Powell Road attended the meeting with her daughters to express her concern over her road’s condition. PJ Martin/The Herald-News

Stephanie Vaughn addressed the court concerning Powell Road which she had previously spoken with Magistrate Kevin Crain about. She did say that the county road department had done some work on the road, which helped, but that the road is still ‘scary’ to drive on.

“We’ve got 394 miles of county road. We’re working on all of them, trying to get em all,” answered Stilts, adding, “Drive slow and be safe. Be patient.”

The donation agreement for the Barren River Area Development District Community Aging Services for Fiscal Year 2019/20 in the amount of $2,000 was approved. This is a yearly donation.

The Edmonton/Metcalfe Industrial Development Authority recently accepted the resignation of Rick Hope from their board. The court approved the appointment of Wes Jolly to fill the open position.