Dara Jo Wright had what most would consider an ideal childhood and family dynamic. She was the daughter of parents who taught her and her siblings to work hard and achieve their dreams. Her dad was the pastor of a church he founded in Munfordville. Between sports, clubs and even a 4.0 GPA, Dara Jo tried her best to make her life look good on paper for college.

By all considerations, she was on the path to the perfect future. But for Dara Jo, one night of bad choices changed it all.
In the fall of 2014, Dara Jo began her education at Berea College.

“Life was normal,” Dara Jo said. “I went to class, studied hard, worked in my assignments and made good grades. The only thing I didn’t do was socialize. I didn’t have any friends my first semester there. I have always been pretty introverted, so going to a new place where I didn’t know anyone was a struggle.”

One day, a few people that Dara Jo had met in class invited her to hangout. On a Friday night, she did just that and was introduced to what would affect her for years to come: drugs and alcohol.

“I had not tried drugs or alcohol before I got to college,” Dara Jo said. “That night I smoked weed and had a few beers. I did not feel pressured to do so or anything. I was curious about what it would feel like, and I was tired of not having anywhere to fit in. I really wanted to be apart of this crowd. They seemed so happy and free. That was something I desperately wanted to experience.”

What first began with weed and beer eventually turned into pills like Xanax and Percocets for the college freshman.
“When I first started using, it was only on the weekends at parties or just hanging out around campus,” Dara Jo said. “I focused on my school work during the week, and the weekends were when I would let loose and have fun.”

At first, Dara Jo’s drug and alcohol use did not effect her school work or relationships.

“I tried my best to maintain balance between my school work and my using,” Dara Jo said. “I looked forward to the weekends as my relaxation and escape from reality…The drugs and alcohol made me feel invincible. I was who I had always wanted to be when I was high: a confident, fearless woman who could do anything. It was also a way of running from all the things I did not want to face. It made everything feel better for a few moments. ”

“It definitely took a toll on my classwork,” Dara Jo said of her usage. “My focus shifted from assignments to getting high. I became obsessed with smoking, and I started cutting class and missing work so I could satisfy that obsession. My personal relationships took a few hits as well. I started to change, and I started to fall back from everyone because I was too worried about getting my next buzz.”

Dara Jo’s health also suffered. She became constantly tired, with no motivation to do anything productive.

“The weight of trying to please the people around me was a huge issue for me,” Dara Jo said. “I hated who I was, so I tried to be who everyone wanted me to be. That is why I continued to get high. I was miserable on the inside. I went through some dark times in my addiction, and I continued to use to numb the pain of those traumatic experiences.”

A year into using, the drug and alcohol use became Dara Jo’s obsession.

“Almost like we as humans need water to survive, I thought I needed drugs the same way,” Dara Jo said. “I went from using on the weekend to using multiple times a week, and eventually I had to be high all the time. It was no longer an enjoyable pleasure for me. It was a means of survival. At my worst point, I was taking about five or more pills a day, usually Xanax and sometimes a Percocet here and there when I could get them. I would smoke weed everyday as well and drink occasionally.”

Dara Jo did everything she could to hide her addiction from family and friends. She would change clothes often so no one could smell the weed. She would often stay the night with others so she wouldn’t have to go home intoxicated, and she would use eye drops so that her red eyes were unnoticeable. The change in Dara Jo wasn’t even noticeable to herself at first, but she eventually began to to feel the effects of her addiction and double life.

“I kept the drugs hid at home or in my car. I would do my best to act sober,” Dara Jo said. “I was exhausted, depressed and angry. I was tired of having to chase a high to numb the pain I felt inside. I was depressed because I was losing myself, and I felt like I was too far gone to find who I was again. I was angry because I hated the life I was living, but I felt like I had to continue to live in it with no way out.”

Eventually, Dara Jo was unable to manage college with her addiction. She completed a year and a half at Berea before she chose to leave and return home.

“When my family became aware of my addiction, they were extremely hurt,” Dara Jo said. “All they wanted was to protect me from who I was becoming and give me the help I needed, but I didn’t have ears to listen to them. I was blinded by my own addiction.”

At the lowest point of her addiction, Dara Jo was sitting in her car at two in the morning and felt that she would rather be dead than to continue living her life.

“At that moment I was done living. I was done fighting myself,” Dara Jo said. “I felt I had nothing else to live for…I took a handful of pills and prayed that God would take me in my sleep or let me get hit by a car on the way home.”

But Dara Jo’s life did not end that night. Yet, more low points were ahead. She received a DUI and a drug charge, was put on pre-trial diversion, and was eventually court ordered to rehab. On March 20 of 2018, Dara Jo entered into rehab at the WARM Center in Henderson, Ky. She was in the program for nine months.

“I hated rehab at first because I was still in denial about having a drug problem,” Dara Jo said. “I hated the people, and I hated being away from home. I was just really angry when I walked in those doors.”

Soon, however, Dara Jo learned that rehab was the best thing that could have happened to her. Rehab taught Dara Jo how to live again.

“The biggest change in my life since I have been sober has been the peace I experience daily,” Dara Jo added. “I never knew what peace felt like until now. Another change is my attitude and outlook on life. I am grateful for small things as much as the big things. I genuinely love and appreciate people.”

Sobriety is something Dara Jo said she continues to work on each day.

“I am definitely steal healing from addiction. It isn’t something that can be fixed,” Dara Jo said. “I have to put action into my sobriety daily. I go to AA meetings at least four to five times a week. I work with other addicts. I do daily inventories of my actions. I do not put myself into situations that would give me easy access to drugs and alcohol. I do my best to protect everything I have worked hard for…I have started working out and putting my energy into bettering myself and my health.”

Dara Jo said the relationships and opportunities she damaged during her addiction are also still in the healing process.
“I feel I hurt my family the most with my addiction,” Dara Jo said. “I can’t imagine how it would feel to see someone you love destroying their life, knowing there is nothing you can do for them…Nothing is fixed over night when you become sober. Time heals all.”

From experience, Dara Jo said it is easy for both addicts and the family of addicts to sink into a hole of despair. But her best advice lies in three words: never give up.

“To the addicts who may be out there struggling, do not give up. Seek out help,” Dara Jo said. “You are worth more than the life you are living now. There is a way out of the darkness. You can find happiness, too. Remember there is always HOPE – Hold On, Pain Ends.”

“To the family and friends of an addict, it is not your fault because you may see them struggling but they don’t know they are. Never give up on them,” Dara Jo continued. “Love them through it. Remind them that they are worth fighting for. Continue to guide them.”

In regards to addiction and sobriety, there is often conflict of opinions of whether or not addiction is a disease. As a former addict, Dara Jo has her own viewpoint.

“To those who don’t believe that addiction is a disease, I would say that they are entitled to their own opinion,” Dara Jo said. “However, they shouldn’t look down on addicts because they haven’t lived in their shoes. I do believe addiction is a disease. It is not a lack of self-discipline or poor choices. The physical makeup of an addict is different than a normal person. Therefore, when we take a drug or drink, our bodies crave for more.”

After exiting rehab, Dara Jo focused on keeping her life on track. She chose to reside in Henderson and now has a job with a packing company in Evansville, Ind. She said that living life sober again has been indescribable.

“The past year and two months that I have been sober, I have received nothing but blessings from God,” Dara Jo said. “I have a steady job to pay my bills. I have beautiful people surrounding me, who love me for who I am and push me to be better. I have love for myself today and that is what I cherish the most about this year: self love and self growth…I feel great about myself and where my life is headed.”

Although she knows there are people who still see her failures, Dara Jo said she is not who she once was.

“I believe that some people will always see me as an addict and nothing more. That is a consequence I have to face, unfortunately,” Dara Jo said. “However, the people who I value the most know who I am today, and that’s what matters most to me. I want people to know that I am not what I have done, but who I am becoming. I am proof of God’s overwhelming mercy and grace. I have discovered a passion for helping people. If anyone out there is struggling, do not hesitate to reach out.”

“The drugs and alcohol made me feel invincible.”
Dara Jo Wright 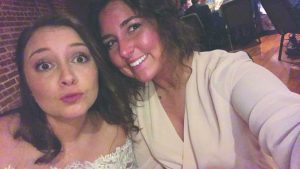 Sobriety has allowed Dara Jo Wright to enjoy the important things, like being a part of her sister Jamilyn’s wedding.