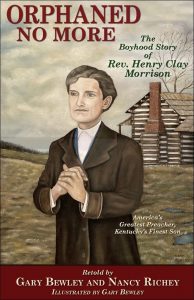 Richey is certainly proud, and because of what she and Gary Bewley have written about him.

The book titled Orphaned No More tells of the time spent in Barren County by Henry Clay Morrison. He was the founder of Asbury College and Seminary but lived on Tompkinsville Road until leaving in 1870.

Locally, he is most well known for being the founder of the annual camp meeting held where Morrison Park sits. The sight is one of the few remaining camp revival sites left in Kentucky.

“Gary Bewley and I have workedon restoring the old Morrison Park Meeting site, which Morrison founded and have completed this book,” said Richey.Richey and Bewley, as well as many others, have found Morrison’s story very inspiring.

“Henry Clay Morrison lost both of his parents when he was very young. His mother died when he was two, and his dad died when he was four. Those are circumstances that you would never imagine, as a typical country boy, he would even be able to leave the county. Let alone go on and become a nationally known evangelist,” Richey said.

However, you don’t have to be familiar with a legacy of Henry Clay Morrison to enjoy Orphaned No More.

“The book includes much local history and many never before seen photographs,” said Richey.

With so much local family history accumulated in the pages, Richey hopes people will enjoy the book for its history and images of the past.

The book can be purchased at Awards on the square in Glasgow, on Amazon.com and at acclaimpress.com.