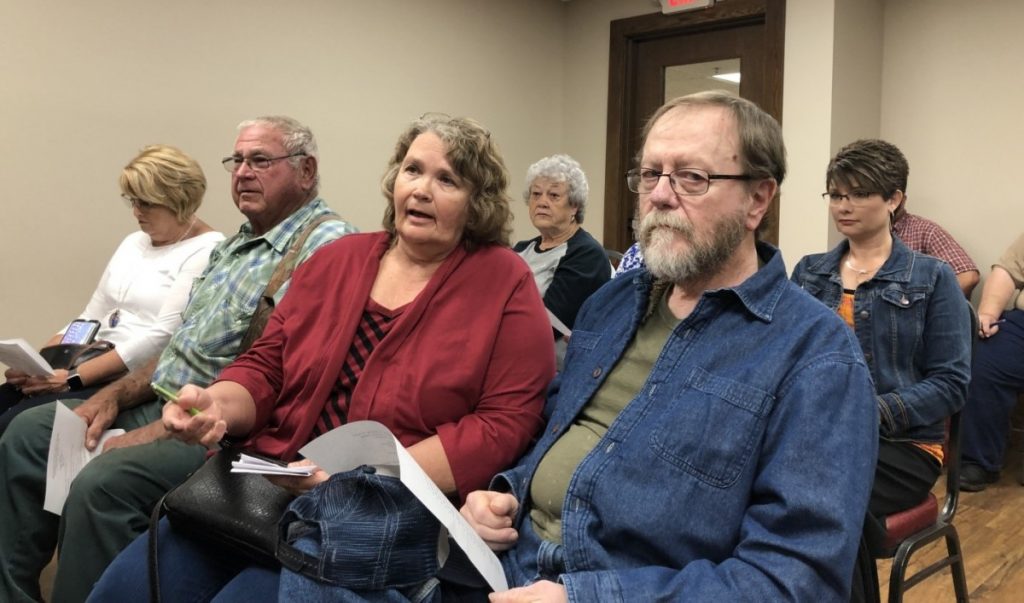 Some of the residents who voiced their concerns about the rendering facility at the fiscal court meeting Tuesday.

District 4 Magistrate Ronnie Miller among other officials have been fielding complaints about the horrid smell coming from the rendering plant located on the Greensburg Road for months. In an effort to discuss the issues with the new representatives of AgRenew, several residents of the area along with the owners of the plant were asked to appear at the May 14th fiscal court meeting by Miller.

Residents were given 5 minutes each to voice their concerns and complaints about the facility. The first resident to speak was Dwight Daugherty. He summed it up by saying, “The smell from that place, down there, was terrible. It will make you gag. It will make you sick.” His wife, Deborah noted that their 8-year-old great-granddaughter even commented on the horrible smell when she got off the school bus.

Paul Smith and Sherry Wilson who own and operate a cabinet business near the rendering facility stated that they are having trouble operating their business, the smell is so bad. “There have been days we have had to close our shop.”

Wilson voiced concern over customers leaving and that family member cannot visit for holidays or cookouts because of the horrible smell and its unpredictability. She also stated that some of the trucks traveling down the road are not covered.

Another resident, Shannon Field explained, “I couldn’t plan my daughter’s 16th birthday party last year because I didn’t know for sure if we were going to have a smell or not so I had to move it elsewhere. We’ve also smelled it here in town…on mornings when we’ve had a heavy dew or fog.”

She also noted that property values near the facility have dropped by 50 percent.

Other residents who spoke were Zack Coleman and Charles Brown. One resident told of seeing dump trucks go by his home with animal legs sticking up in the back. Judge/Executive Harold Stilts even spoke up saying that he and his wife were planning to stop at Ma’s Deli one evening but as soon as they got near the smell was so bad that they had to go somewhere else. “It gets bad, unbearable at times, appreciate you all’s concerns and the court is trying to work with the people to get some resolve here.”

Miller introduced David Dixon from Texpack and Protein Products who has been helping to tackle the problems at AgRenew after it came under new management on January 1, 2019. Dixon has been in the rendering industry for 22 years and is a professional engineer. “We are familiar with the concerns that people have.” He referred to rendering as, “The black side of recycling.”

Dixon explained that the previous owners were dealing with material labeled ‘4D’ (down, diseased, dying, and dead) animal products. That material went to feed grade products.

“Our goal with partnering up with AgRenew is to fix those issues, bringing in some different technology, and prevent this from being an issue,” Dixon explained that Texpack produces a high-end pet food formulation which is 70 percent protein. Their fresh material is labeled food grade and is hauled and stored in refrigerated trucks until cooked. He further explained that their material is food which has been turned down for human consumption due to things like a foreign object (plastic, etc). It comes from food grade producers.

The raw materials must be processed in a food grade environment adhering to strict standards of operation. Everything must be traceable from its point of origin if the FDA or USDA requests the information.

Judge Stilts inquired as to how long it would take to retrofit equipment and technology and Dixon stated he plans to bring in equipment within the next couple of weeks, and clean, but first the scrubber system and vapor condensing system need to be working.

Dixon added, “We don’t want any kind of hostility, we wanna be good neighbors.”

Co-owner, Matt Gibson also spoke to residents. His father, Grant Gibson is co-owner but was unable to attend the meeting. Gibson stated that there were two reasons for the horrible odor, the raw materials were kept too long and the air scrubber did not work.

He explained that they are in the process of repairing the air scrubber system which was not working, correcting the plumbing system which was installed incorrectly and that the faster turnaround time coupled with the refrigerated trucks will “make it more suitable for the location.”

A resident asked, “Are the doors supposed to be closed when they are rendering?”

Gibson answered, “Yes. We’re going to get that stuff under control…This has got to be done the right way.”

Wilson asked for a phone number that could be called in case any of them had a problem and Dixon gave his contact number to her.

Magistrate Kenny Scott pointed out that, “Hotter weather is coming and we know what hotter weather means. I understand your working on it, but the faster you can get this smell taken care of the happier these people are gonna be.” 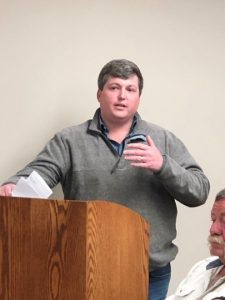 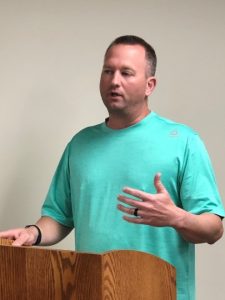