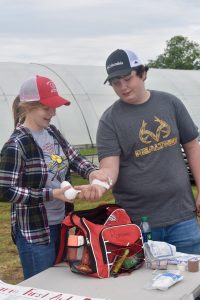 Autumn Glass and Claire Wilson did First-Aid demonstrations with the help of their assistant Jimmy Young.

Last week 350 students from MCMS were transported to picturesque Hawkins Farm near Randolph to learn about the various aspects of farm safety in a real-world environment.

Dozens of booths and learning stations were set up across the farm. Topics included everything from chainsaw, pesticide, ATV and firearm safety to First Aid and poison plant, insect and reptile identification.

“Even if these children do not live on a farm like we do, there is a very good chance that they own a four-wheeler or have been on a tractor. We hope today promotes safety, it could even save someone’s life,” said Lynn Hawkins, who owns and operates Hawkins Farm with her husband Harvey and three children.

Two of the most informative and moving speakers of the day were individuals who have survived accidents on their family farms and lived to tell the tale: Beau Tabor from a neighboring farm, and Claudia Bell, daughter of Metcalfe County Extension Agent, Brandon Bell.

“Spring is a busy time of year for farmers. On March the sixth of 2016, I was trying to save some time and beat the rain. Like a lot of farmers I try to save money by grinding my own corn,” Tabor said.

Tabor went on to describe shoving corn into the grinder while the gears were still running after he shut the machinery off, and the aftermath.

“It look like I had shoved my hand into a meat grinder. I was flown to the University of Louisville hospital for surgery,” he said, reaching his hand into the sky for the crown of students to see.

“I lost four fingers. It looks a lot better now and I am very lucky. The lesson is, if your hay gets wet, it does. The work will be there tomorrow, don’t get in a rush because I’ve learned that that can be life-altering.”

On the subject of impatience Tabor also stressed the importance of being patient while driving on the road behind tractors.

“Don’t get impatient, don’t try to pass it and cause an injury. The farmers grow our food, be patient with them.”

Just this month, Claudia Bell and her sister Mary Cate Bell were involved in an ATV accident that could have ended tragically.

Claudia was driving the ATV.

“I used to tell people I was a good driver,” she said.

“I have driven it every day since we had it, I was always driving it, and the old ranger,” said.

However, her experience was no match for a steep decline.

“We started to get off the road and I tried to turn back,” said Claudia. When she over-corrected the vehicle,  it caused it to turn over, roll through a barbed wire fence and towards a tree.

“A rollbar, seatbelts and God save my two daughters,” said Brandon Bell. “I know how they survived it.”

Fortunately, they did survive the accident with scrapes, scratches, concussions and a fractured wrist.

Real life stories like Bell’s and Tabor’s seemed to have the most impact on attendants.

“We hope they all take something away from this, and that they all learn something,” said Lynn Hawkins.

“You don’t have to live on a farm to appreciate agriculture.” 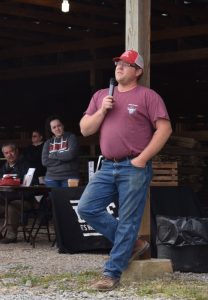 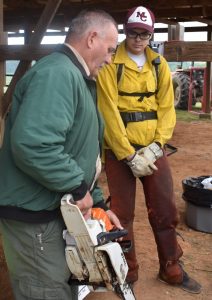 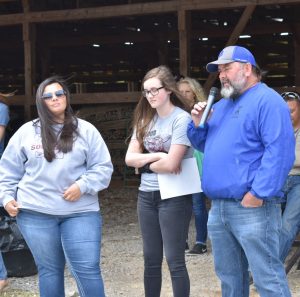 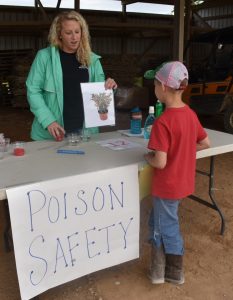 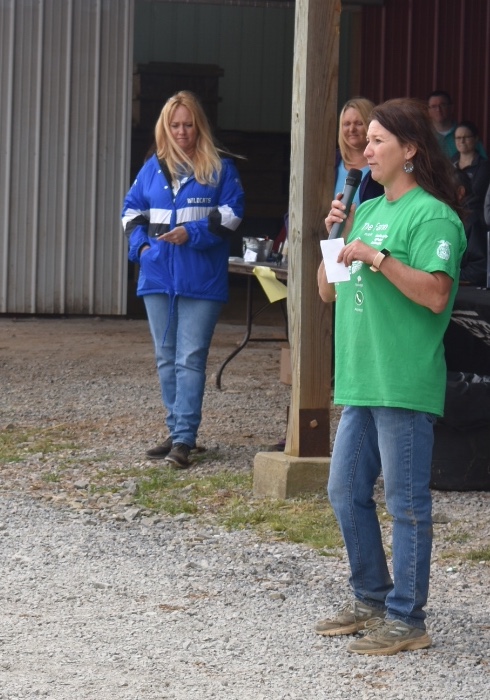