The monthly meeting of the Edmonton City Council was held on Monday, May 6th with special guest Andy Lange, Assistant Director for Kentucky Rural Water Association (KRWA) who presented a survey of the water and sewer rates. The cost of compiling the survey was paid by the Appalachian Regional Assistance Program.

According to Lange, the water rates have remained unchanged since 2009 and sewer rates since 2013. Currently, the City of Edmonton is in the process of planning a water system construction/maintenance project that is estimated to cost approximately $5.2 million. That project is necessary to correct the water quality issues that have occurred over the last couple of years.

According to Mayor Doug Smith, “It’s a bitter pill to have to swallow, but to fix the water this is what it’s gonna take.”

The Kentucky Infrastructure Authority (KIA) is available to fund the project with principle forgiveness of $1.7 million and an interest rate of one half a percent; however, to qualify the city must prove their ability to pay back the loan. In order to be approved by KIA, Lange suggested that water and sewer rates be increased beginning July 1, 2019. Lange suggested a 20 percent increase in water rates and a 10 percent increase in wastewater rates.

On behalf of the Metcalfe County Farmers Market Ken Childers asked the council to join the Community Partners Program and donate $1,000 to assist the market in paying their portion of the government-sponsored voucher programs such as the Senior Nutrition, WIC, and SNAP Programs. Childers reported a 97 percent redemption rate for the USDA Senior Nutrition Program vouchers and that a grant has been submitted to Frankfort for a new market facility. The council unanimously approved the request to join the Community Partners Program.

The ABC report was presented by Freddie Ray, who stated, “Everybody is in compliance.”

Also pertaining to new ABC legislation, Mayor Smith added, “As you know the Kentucky legislature enacted legislation allowing municipalities like the City of Edmonton to quality to receive regulatory license fees.” The council voted to approve the first reading of Ordinance 2918-19-13 which amends Ordinance 2016-17-02 amending the regulatory license fee to 5 percent.

A total of 23 runs was reported for April for the Edmonton Fire Department by Chief Jerry Clemmons. Those consisted of 17 medical, 1 field fire, 1 alarm, 1 tree down, and 3 special details.

PRIDE Spring Cleanup is scheduled for May 21st. The Metcalfe County High School senior class has volunteered to participate in the clean up again this year. Anyone who wants to volunteer can pick up gloves and garbage bags at city hall.

The update on the fire department building repairs has been postponed until the next meeting when more information will be available. 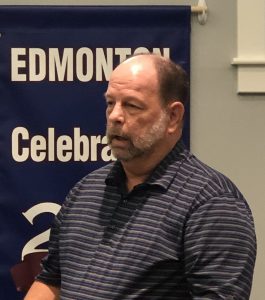 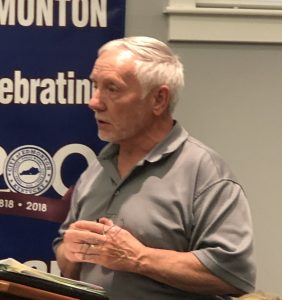