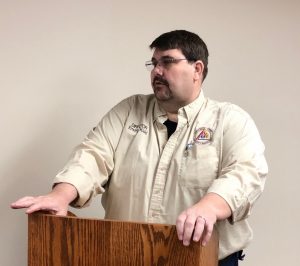 The April 23rd meeting of the Metcalfe County Fiscal Court was short one magistrate, Ronnie Miller who was absent due to sickness.

EMS Director Emory Kidd presented new updates on the Reece Hurt Road tile project. “The tile has dropped another foot and a half.” Last year after two disasters occurred a sinkhole was reported at the 6 by 80-foot corrugated metal road tile on the Reece-Hurt Road. The repairs are too large for county workers and have been designated a FEMA project.

“The project worksheet basically gives us the bid specs. That is a large project so it’ll be 87 cents per dollar coming back to us and we’ll be able to get it in increments as it’s done, and they [FEMA] will hold 10 percent until final inspection.”The road will need to be shut down for no more than 5 days and it was suggested that it be done around July 4th while school is out and larger factories are shut down for the holiday to give residents less of an inconvenience.

Kidd related news that President Donald Trump signed a major disaster declaration which will make federal disaster assistance to the Commonwealth of Kentucky for local recovery efforts from the Feb. 6 to March 10, 2019 weather disasters in the amount of approximately 40-50 million dollars.

Also, Homeland Security will have funding this year and Kidd stated that he will have more information about those grants at the next meeting.

Concerning the bid on the Fletcher Road Bridge replacement from the last meeting, Judge/Executive Harold Stilts advised that, “After reviewing the bid and looking over it, I’m gonna ask the court to reject that bid because it was over budget and there was a few details in the bid spec that needed to be put in so we’re gonna have to rebid that.” The magistrates were in agreement and voted to reject the bid from Bluegrass & Associates in the amount of $82,700.

The last payment was made on the Metcalfe County Government Center in the amount of $16,000 after the remaining repairs and touch-ups were completed.

There were no public comments received by mail or phone concerning the proposed use of County Road Aid and Local Government Economic Assistance funds.

The appointment of Dawn Devore as the Citizen Member of the Board of Directors of the Barren River Area Development District in the vacancy left by Howard Dickson, was approved.

The next meeting is scheduled for May 14th.