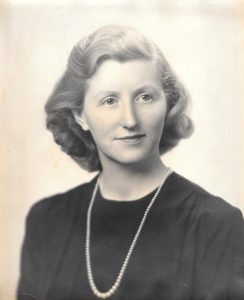 CENTER – Floyce Alyne Jolly, age 93, was surrounded by her family when she went home to heaven on Saturday, April 20, 2019. She was the daughter of the late Paul and Bertha Edwards Boston and was known to many as “Mrs. Red”, especially to the children she taught in her Sunday school class for more than 35 years at Seven Springs Church. Alyne was a lover of animals, the Kentucky Wildcats, and flowers. She enjoyed cross-stitching, gardening, collecting antique creamers, and putting together jigsaw puzzles. She was an avid pitch player who knew the true meaning of hard work and eternal love.

Funeral services will be held at 1:00 p.m. Saturday, April 27, 2019, at Butler Funeral Home in Edmonton with the burial at Seven Springs Cumberland Presbyterian Church Cemetery. Visitation will be Friday from 4:00 until 8:00 p.m. and after 9:00 a.m. on Saturday.