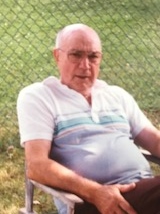 Shorty Wells, 99 of Baltimore, Maryland died Wednesday, April 10, 2019 in Baltimore.  Shorty was born in Huff, Kentucky on January 30, 1920 to the late Pleas Wells and Viola Blanton Wells.  Shorty was a 1940 graduate of Sunfish High School where he played on the Basketball team.   After high school he served his country in the United States Army during World War II  and was honorably discharged as a 5th grade technician.  He worked many years and retired from the Penn Central Railroad as a Brakeman.  He was a longtime member of New Home General Baptist Church.

He was a husband of the late Lera DeBerry.  He was preceded in death by his brothers Gypsey Wells, Lonnie Wells, and Lloyd Wells and by his sisters Maude Oller and Gertie Meredith.  He was the cherished step father of Ann Williams and husband, Paul and the late James DeBerry and wife, Helen and Glen DeBerry and wife, Pauline, and special friend to Ronnie, Carole, and Brian Kirkendall.  Shorty was also blessed with many grandchildren, great grandchildren, nieces, and nephews.

His visitation and memorial was at Gonce Funeral Home in Baltimore, Maryland.