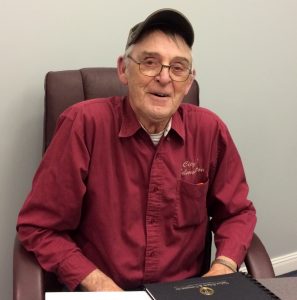 Councilmember Wayne Wilson voted no on the park pavilion estimate proposing that a second estimate be solicited. PJ Martin/The Herald-News

The Edmonton City Council members voted on several items at the April 1st meeting affecting the future plans of Edmonton. Mayor Doug Smith began by asking City Clerk Dawn Devore to present the results of the Request for Qualification (RFQ) advertisement for Engineers for the Water Improvement Project.

Devore stated that RFQs were received from ten different engineering firms. The committee met, scored each, and recommends that Monarch Engineering Company be chosen. Council member Curt Estes asked, “Where is Monarch located?”

Devore explained that the engineering firm is responsible for getting the plans ready per specification so that the project can be advertised for construction bids. The plans must also be approved through the Kentucky Infrastructure Authority (KIA). The council approved the recommendation.

Public Works Superintendent Moe Hensley addressed the council about advertising for the gas truck replacement. The replacement was in last year’s budget but has yet to be replaced. The council approved the advertisement for a replacement.

Hensley also asked for confirmation of the gas line extension guidelines citing the 2013 guidelines of four customers per mile with those customers being responsible for paying a quarter of the total cost (split between the customers). These guidelines were confirmed.

Parks and Recreation Director Page Edwards was not in attendance but Devore presented information for the Land and Water Conservation Fund Grant that she and Edwards are working on in the amount of $150,000. The grant has a 50% match.

There are plans to purchase more picnic tables and a small maintenance building for Edmonton Memorial Park. Plus the estimated cost of constructing a picnic pavilion at the park was presented. The estimate from Coy A. Neal Construction is $14,800. The pavilion plan contains electrical service with ceiling fans and a semi-separate BBQ section. The estimate was accepted with a vote of 5-1 with the one no vote cast by Wayne Wilson who expressed the need to get a second estimate for the building.

Council member Faye Word asked, “Is there any way that roofs can be put over the stands?” Many of the council were in agreement that a roof (home side) is needed and also the stands at the larger field need to be raised. It was discussed and agreed that concrete should be used to build the height of the stand and that estimates for the concrete and roof work should be taken.

The Alcohol Beverage Control (ABC) report was not presented as Coordinator Freddie Ray was not in attendance; however, Devore updated the council on the legislation that had passed concerning the 5% regulatory fee on alcohol sales. Previously the county and city were unable to collect those fees due to population size. This begins sometime around August.

Fire Chief Jerry Clemmons was absent due to recent surgery and no report was presented in his absence. A listing of fire department building repairs was discussed and Councilmember Austin Bragg suggested breaking the work up into two section bids plus a combined bid. The motion to bid the work as 3 individual bids was approved unanimously.

A definite date for the PRIDE Spring Cleanup has not been determined but will be late April or early May on a weekday.

Smith stated that we [council] are looking into creating a Downtown Project Committee and would like for Faye Word and Cathy Nunn to be members of that committee. Committee members would include others from various local group and organizations and look into ideas to improve the downtown area.