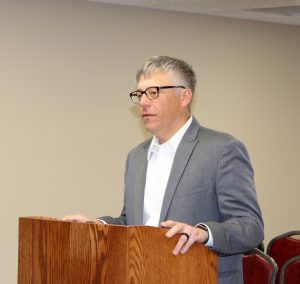 The rural municipal aid funds allotted to Metcalfe County for rural and secondary roads in the 2019/20 program are $940,308. Last year’s work came in over the projected amount with a negative balance of $83,334 which leaves 856,974 for this year’s funds which are broken down as follows.

In reference to the flex fund amount, Crawford explained, “The fiscal court has the flexibility to recommend funds be used on state rural secondary road projects or county road resurfacing projects. But they cannot be gravel roads.”

Bids were taken on two new bushogs to replace the older ones used by the county for mowing. The current ones need an estimated $ 5 – 6000 in repairs. Harris Farm Equipment presented the lowest bid at $13,250 with a 6-year warranty. The court approved the purchase of two Bush Hog 2810 Single Flex Wing Rotary Mowers. It should take 2-3 weeks to receive the ordered equipment.

Sammy Stotts a resident of Highway 640 approached the court with his concern over the road still being flooded after speaking with Magistrate Kevin Crain.

Stotts suggested draining the water which has been covering Highway 640 for around a month and a half with pumps or irrigation equipment. “Why couldn’t we get somebody in there and pump the water out? That’s fairly simple. There’s plenty enough farmers around here.” Adding that, “its neighbors helping neighbors” and that he would volunteer to help get the road opened back up.

When asked how much water still covered the road, Stotts replied around 3-4 feet and that it’s going down very slowly. He had already spoken with the highway department who explained that they are waiting for the water to recede, then plan to open up the sinkhole that normally acts as a drain in that area.

Judge/Executive Harold Stilts advised Stotts to see him later and, “We’ll make some contacts out that way and see if we can help in some way and get some relief for people on that road,”

County Attorney Barry Gilley was not in attendance and due to sickness Magistrate, Ronnie Miller was also absent. 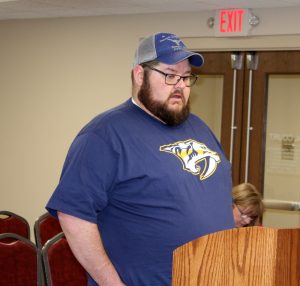 Sammy Stotts a resident of the Knob Lick-Wisdom Road expressed his concern over the still flooded roadway. PJ Martin/The Herald-News