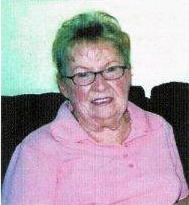 She is survived by her husband of almost 50 years, Legene Welsh; daughter, Judith Cherry of Scottsville, KY, and son, Larry Cruce (Verne) of Addison, IL; 9 grandchildren; 9 great-grandchildren; and 5 great-great-grandchildren. Other survivors are a sister, Bedie Smith, and a brother, Stanley Jobe both of Edmonton. She was a special friend to Terry Hurt and Charlotte Welsh.