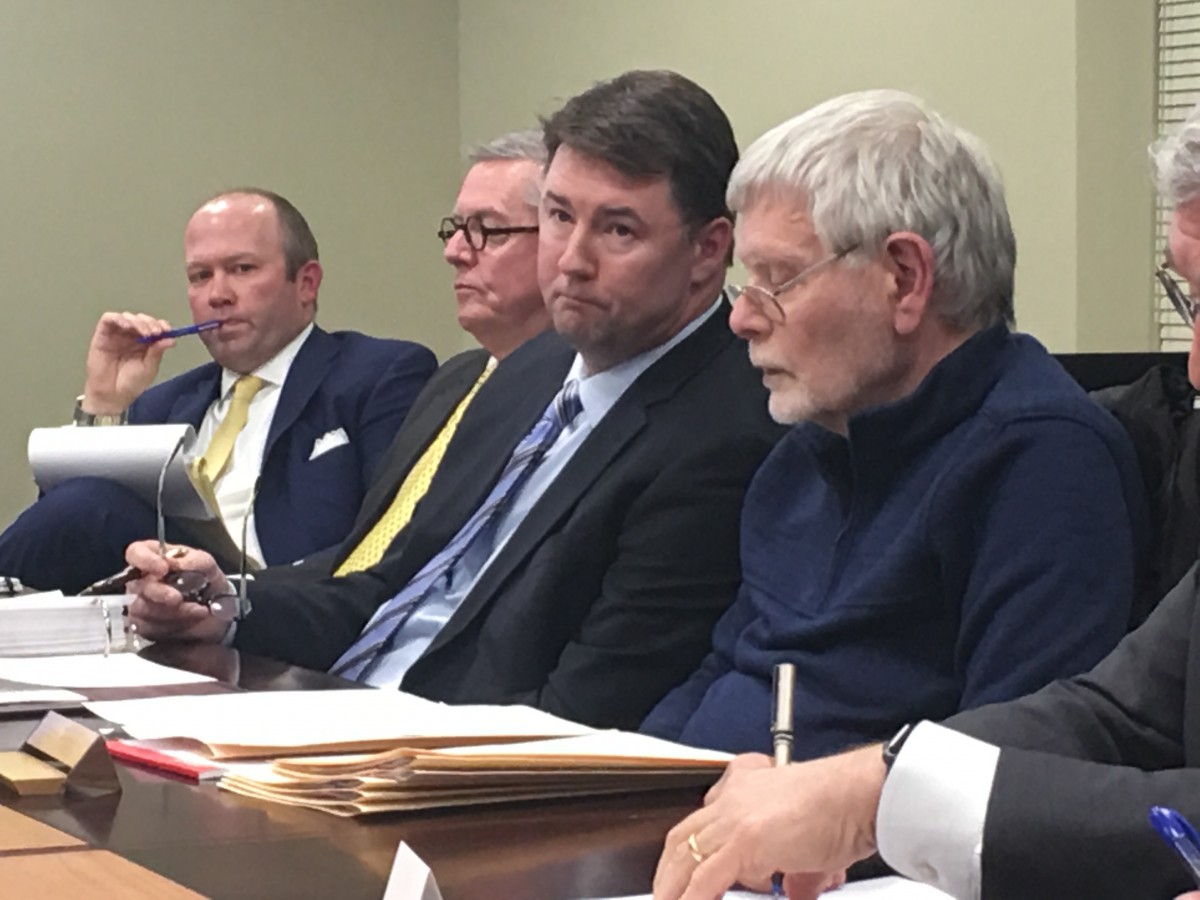 From left, Superintendent Billy Ray’s Bowling Green Attorney Chris Davenport, Ray, former chairman Jeff Harned, and chairman D.T. Froedge listen as Charles Musson, an employee for Rubin & Hays speaks on the need not to proceed with termination at this time.

Glasgow Electric Plant Board board members Tag Taylor and Jeff Harned put up a compelling argument for keeping Superintendent Billy Ray and legal counsel Jeff Herbert; at least in the short-term.

On Tuesday, February 19, the special called meeting for the Glasgow Electric Plant Board began with conflict in the most simple parliamentary procedural and standard rules for conducting a meeting proving there was no clear path for order in place.

Board member D.T. Froedge attempted to adopt an agenda at the start of the meeting and establish a commonly known meeting management process, a parliamentary procedure, specifically Robert’s Rules of Order. He was told this isn’t the way it is done for the GEPB.

Froedge then moved to adopt Robert’s Rules and was advised by legal counsel Herbert that it wasn’t proper to do so because this is a special called meeting and no items can be discussed that weren’t previously noted to the public and the press.  Doing so would be a violation of KRS Open Meeting laws.

Froedge, who had now been elected Chairman moments earlier, asked if he could get a motion to adopt Robert’s Rules and newly elected secretary Tag Taylor spoke against using the process saying this board has their rules set as they see them necessary because they are a self-governing board.  Froedge described them as arbitrary and felt by having the Robert’s Rules it would provide order.  He responded to Taylor, “We don’t seem to have an order that anybody understands.”  Former board chairman Jeff Harned said, “We’ve never had a problem with order.”  Froedge responded, “We just did.”

The vote never happened and Froedge lost control of the meeting at this point.  Harned asked for bond counsel to share their opinions for keeping management in place.  Charles Musson, a consultant for Rubin & Hays gave numerous examples of what may happen or could happen if the GEPB chose not to proceed or to significantly alter the bond details.  He alluded to the possibility of costly ramifications if it wasn’t to proceed for any reason.

It was the opinion of Harned, Taylor, and Herbert that if Ray was removed it would possibly cost the EPB this refinancing opportunity forever and possibly even expose the board members personally to costly legal action.  Pending legal action isn’t usually something other government agencies would discuss in open meeting, yet Herbert allowed it to continue.

Froedge made his argument that this issue would be best served once the board stability had been resumed with new legal counsel and superintendent in place.  He made his position known in the interest of full disclosure and said there is no way the bonds couldn’t be rebid and obtained at a later date.

The Barren County Progress confirmed that Froedge had legal counsel prepared to enter the meeting and was intended to speak on these specific issues yet he wasn’t permitted inside the building due to it being at fire capacity.

The vote was introduced and discussed without any opposing professional arguments offered.  There were actual uniformed police officers at each entrance because numerous GEPB employees lined the walls and few, if any, community members were allowed inside the facility.

Taylor also pontificated that by removing Herbert and Ray it could not only cost the EPB the refinancing savings but also even affect all of city government and possibly place board members in legal jeopardy as well.

After several minutes of detailing a pretty gloomy one-sided possibility for altering the bond process the floor was then given to Ray’s personal attorney from Bowling Green, Chris Davenport, who was seated at the end of the board table beside Ray.  He spoke of his defense for Ray and alluded to the possibility of legal action if they proceeded at this time or in the future.  Again, no opposing legal opinions were permitted and this, too, had justification for moving to a closed session to discuss, yet board attorney Herbert permitted it in open meeting.

The agenda topics were set so even after these discussions took place the items for Herbert and Ray’s replacement was required to be introduced.

Froedge said he would entertain a motion for Ray’s removal, which died for the lack of a motion and he himself never moved to remove at this time  After more discussion from Taylor and Harned, Harned decided he would make a motion to push for a vote.

Froedge detailed a few items he believed were substantial and would be basis for cause for Ray’s removal.

Froedge spoke of how GEPB customers were given the costly burden of significant savings passed along to corporate operations in the service area.  He said millions of dollars were shifted from large corporations and industry to those with least ability to pay for it and that this was wrong.  He cited the Attorney General issuing an opinion that this rate structure put an unfair burden on the residential and small business customer.

He said that the fixed charges have doubled and in some cases even tripled.  He said the very people who purchased this power company for the purpose of having low cost energy are being penalized.

Biggers spoke of how people are hurting and couldn’t afford to run essential medical devices.  He gave examples of various types of equipment needs for disabled or special needs individuals.

Harned said, “One person’s ability to afford an electric bill is not an indictment on the management of EPB, if anything it is an indictment of the community as a whole.”

Biggers actually began his comments with complimenting Ray’s billing plan known as “Infotricity” although perhaps ahead of its time.  He just couldn’t understand why Glasgow needed to rush into it.

Harned explained the need to move quickly for this rate structure due to years of declining sales.  This is the first time this explanation had been introduced.  As a matter of public record this program has been described and defended as a “revenue neutral” billing program.

It is now Ray’s legal defense that this billing system was approved by this board and to hold Ray accountable isn’t justified.

Board members Marlin Witcher and Mark Biggers each said they believe it was best to allow the bond process to continue and make no changes.  Each indicated they would certainly look at these issues at a later date and confirmed their positions after the meeting.  They conveyed the same sentiment, “It would be irresponsible to vote to remove in the face of what was presented tonight, the bond issue needs to be resolved first and take it from there.”

Froedge again attempted to close the issue and although initially Herbert agreed no discussion should be permitted, he changed his position, saying since the board has never adopted Robert’s Rules it would be okay.

Taylor and Harned felt a vote must happen with Taylor saying the people of Glasgow deserve to see a vote.  They took the meeting from Froedge by moving and seconding the vote to remove Ray.  Taylor was permitted to speak for several minutes berating Froedge for even considering such a move against Ray and Herbert and for placing all of Glasgow in this terrible predicament.

Once Taylor conceded the floor and gave a second the vote was taken.  Froedge was the only vote to remove Ray.  Harned and Taylor confirmed after the meeting they believe this vote means it is done and over.  Each of these men have pledged to have the Glasgow City Council investigate and remove chairman Froedge from their board.

The bond refinance is expected to be resolved one way or another on March 5, 2019.