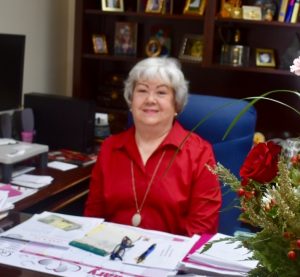 The Edmonton-Metcalfe Chamber of Commerce has been around for a quarter of a century now, and it has gained the respected reputation of being the biggest little chamber in the Commonwealth.

Executive Secretary to the chamber Gaye Shaw has been with the chamber since its humble beginnings.

She says the success of the chamber boils down to one thing. “The People. The people here care about each other,” she said.

Unlike many chambers of commerce who focus on industry and big business, the Edmonton-Metcalfe Chamber has always made small businesses and individuals the focus. In fact, the majority of members are individuals.

“We don’t have any clubs here like the Kiwanis Club or the Lyons Club. It is made up mostly of individual members who want to support the chamber and their hometown.”

Before the chamber was formed 25 years ago, there had been sporadic attempts at forming a chamber, but none stuck, because it was operating on a volunteer basis.

However, under the direction of then President Jessie Crabtree, the group decided to hire someone to work for the chamber. As fate would have it, that person was Gaye Shaw.

Shaw, who had left her job in banking to be home with her children decided it was time to rejoin the workforce when her friend Freda Reece called her and mentioned the job. She and several other applicants were interviewed, and Shaw got the job.

“When I started, I didn’t know anything about what chambers did, I had been a banker. All I knew was chambers did ribbon cuttings I was told I could work four hours a day, and that I would be answering the phone and checking the mail,” said Shaw.

“I would wait for the phone to ring and just hope there was some mail.”

Fortunately, Shaw became acquainted with a group of ladies who worked at other chambers and they shared ideas.

In the early days of just 40 or 59 members, the chamber set a goal of getting 100 members.

“I thought, oh goodness, I hope we can do that,” Shaw said.

In 25 years, lots of things have changed. Today the chamber has 378 members, and Shaw is hoping to see 400 during her tenure.

Changing times have changed the chamber’s needs and these days many of the responsibilities involve social media and website updates.

Everything from information for new and old businesses alike, to daily local menu posts and photos from the many events the chamber is involved with are all part of it.

The annual chamber membership drive held in conjunction with 99.1 the Hoss is a big annual event that drives memberships forward.

Shaw now lives in Barren County and travels 30 miles in each direction, but with her job, many of her friends and her church family all in Metcalfe County she still feels like the small town she promotes is home.

“This is a friendly place,” said Shaw.

“When new people come to town and we give them a welcome basket, they can’t believe how friendly we are.  We have a slower speed pace.”