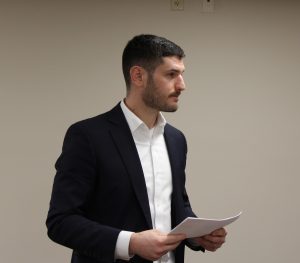 Eric Brady of Enterprise Fleet Management presented an analysis of what the company could do for Metcalfe County. PJ Martin/The Herald-News

The Metcalfe County fiscal court met on February 12th with several guests in attendance. A representative of Enterprise Fleet Management Eric Brady presented information relating to a meeting held weeks ago for vehicle management for the Sheriff’s Dept., Road Dept., and EMS vehicles.

According to Brady, Enterprise Fleet Management is a sister company to Enterprise Rent-A-Car and they manage about 2 million vehicles in North America, 12-13, 000 of which are in Kentucky and Southern Indiana. They have been working with businesses for about 15 years and government agencies for about 5 years.

“Anything to do with a vehicle we can help you guys out with…acquisition, or outfitting vehicles. If sheriff’s vehicles need lights and sirens or the road department vehicle needs a snow plow or a salt spreader,” explained Brady.

As an example, Brady explained, “A typical ¾ ton pick-up truck maybe something that the road department uses, MSRP for a standard truck like that might be around $40,000. You guys are able to buy that truck for 27 or 28,000 dollars. So, you’re not putting many miles on it and if we rotate that vehicle every 4 or 5 years, we are going to sell it for probably close to $20,000. So really your true cost to own that vehicle over that time frame was the difference between $27,000 and what we sold it for. We’re actually helping you guys keep that cycle and making sure you’re operating as efficiently as possible.”

He pointed out that the school system is looking at this system and it would be combining or partnering with the county. Judge/Executive Harold Stilts asked, “What if we didn’t get a number of 20?”

“So we have to have a fleet potential of 20 or more, which is why it is important that we take their [school] fleet into consideration. So that doesn’t mean you have to acquire 20 from me in the first year, it just means that the total fleet potential has to be 20 or more. That is based on manufactures. You’re not considered a fleet until you have 20 vehicles or more,” explained Brady.

No action was taken and the Magistrates were given packets and any further questions may be presented at a later date.

District Director Sandy Simpson of Congressman James Comer’s office was in attendance to relay how important Congressman Comer feels it is for him and/or his staff to be in Metcalfe County as much as possible.

“You all are the eyes, and the ears, and the voice for Metcalfe County as fiscal court members. In your districts, you probably know every person and every household, so if there is someone there that you know in your community that’s having problems with the federal government, whether its social security or veterans or any other issue that we can help with, I hope you will tell those people that the Congressman is someone they can reach out to. We’d be glad to try and help if we can.”

Judge/Executive Harold Stilts told Director Simpson, “You and Congressman Comer are welcome in Metcalfe County anytime you want to stop by. We may be reaching out for a little help on some projects that we’re looking at and we appreciate that.” 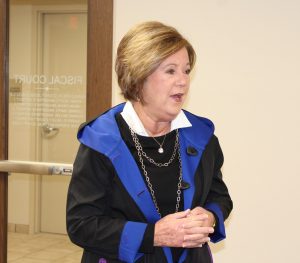 The second reading of Budget Amendment Ordinance No. 2019-02 was approved. The ordinance amends the FY 2018/19 budget to include unanticipated receipts from the General Road, State Grants, Federal Grants, DES, Courthouse Construction, and Homeland Security Funds in the amount of $199,218 thus allowing the funds to be used by the county.

The financial statement was presented by Treasurer Vickie Stephens who stated that as of January 31, 2019, the cash balance of all funds was $3,186,503.41.

Mike Shive was officially appointed to the Edmonton-Metcalfe County Industrial Development Authority Board by a unanimous vote.

Emergency Management Services Director Emory Kidd reported that KRS 39 requires that his departments do a quarterly update; however, “I am going to try to do a monthly update, each month, for the Magistrates. Just a little about what has gone on in Emergency Management.”

Kidd presented a summary report of the January emergency responses, volunteer hours, FEMA issues, meetings, and training courses held to each member of the fiscal court.

The next scheduled meeting is Tuesday, February 26th at 9:00 a.m.