Above is a photo of the Lady Hornet 4th Region Champions as they prepare to leave for the All-A State tournament held at McBrayer Arena at Eastern Kentucky University.

Metcalfe County opened the All-A tourney with a 58-49 victory over Holy Cross (Louisville). The win proved the old saying: It is not how you start. It’s how you finish.

The Lady Hornets fell behind 5-0 and forced Coach Josh Hurt to call two timeouts in the first in the first three minutes of the game. After the second timeout with 5:42 on the clock, Metcalfe County and Braelyn Davis bought whatever Hurt was selling.

Davis drove to the basket for two points and was fouled. Davis made the free throw. The next possession Davis was fouled again and made two free tosses this time. Jaycie Harper got a steal and a basket to tie the game at seven. Harper and Davis both made one free throw to tie the game at 9-9 when Macy Welsh got on board the scoring train. Welsh gave the Lady Hornets their first lead with a 3-pointer, 12-9.

Holly Cross regained the lead at 13-12 but after a Kaylee Harbison block, Davis nailed a 3-pointer for a 15-13 lead at the end of the first quarter.

The Lady Hornets were playing to a home crowd atmosphere with all the fans packed into McBrayer Arena at Eastern Kentucky University. If the early start time (8:30 am / 7:30 am) time bothered them or they just had early jitters, the Lady Hornets came out focused in the second quarter.

Davis hit her second trey and Harper made two free throws for a 22-17 lead. Harbison let the freshmen know that the seniors were going to impact the game at the 4:05 mark when she knocked down two free throws for a 24-17 lead. Harbison added to that lead with a basket, 26-17, while the Lady Hornets defense was giving the Lady Cougars fits forcing turnovers and missed shots. MCHS held Holy Cross to six points in that crucial second quarter.

Marissa Fields pulled down a rebound and Harper followed that with two more free throws for their first double-digit lead at 27-17.

Harper hit a 3-pointer as time expired and MCHS led 30-19 at the half. Davis had nine points and Harper added eight in the first half.

Metcalfe started where they left off with Welsh good from 3-point land. Davis kissed one off the glass and the lead had jumped to 39-23. Harbison added a basket and Welsh hit her second three. 45-27.

Marley Edmunds got a block and chipped in a basket, 47-29 lead at the end of the third.

The Lady Hornets added some unnecessary excitement for the Metcalfe faithful in the fourth period when at one point they committed four turnovers in a row when the Lady Cougars put the pressure on with a full court press. Hurt called a full timeout with 4:33 on the clock and the Lady Hornets lead was 47-37.

Harper continued her clutch performance at the charity stripe when she went two-for-two to push the lead to 49-40. Harper told the Edmonton Herald-News in an interview that she intended to work on her free throws by coming to the gym on Sunday. It paid off (11 of 16).

Fields hit two free throws. Harbison (6 of 8) hit both ends of a one-and-one for a 50-41 lead. She followed those two points with a clutch drive to the rim and a great assist from Harper. Harbison made two more free throws. She scored six points in a row for a 54-43 Metcalfe lead with a 1:43 remaining in the game.

Fields came up with a steal and added to the lead with one free throw. With 10 seconds left on the clock. Harbison made two more free throws for the 58-49 victory.

Harper led the Lady Hornets with 16 points and 10 rebounds. Davis added 14 points and Welsh chipped in 11. Harbison had 12 points and six rebounds. 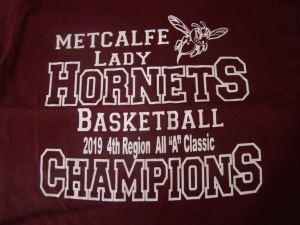 A photo of the front of Lady Hornets 4th Region Champions T-shirt. 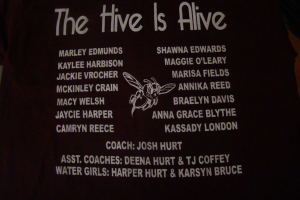 A photo of the back of the Lady Hornets 4th Region Champions T-shirt listing all the players and coaches.