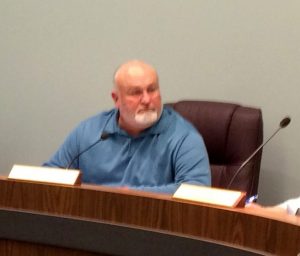 In the event of a tie vote, Mayor Doug Smith has the job of casting the tie breaking vote. PJ Martin/The Herald-News

The Edmonton City Council held a specially called meeting on Tuesday, January 15th, specifically for the second reading of two ordinances, but the agenda was amended to include an executive session to discuss the pay rate for the new position if approved.

Council member Teresa Hamlett inquired as to what an ABC officer’s job entails. Chief Delaney Wilson answered with, “We have to approve licenses, do background checks on anybody that applies for a license, do all the paperwork for them for the license, do blueprints of the buildings. Anybody that’s gonna have a new license coming in there has to be blueprints drawed up. I mean a sketch drawed up it’s not an actual blueprint. The building has to be inspected; you have to make sure they have security cameras, accurate security. You have to make sure that all of their employees get their five-star training that they are required to have.”

Wilson also noted that there are regular checks to make sure all new employees receive the required training, the age requirement signage is up, and you also have to make sure they abide by all the city ordinances.

Several council members asked how many hours a week the job would require and Wilson estimated that the normal everyday work requires about 4 or 5 hours a week, but a new license requires an immeasurable amount of time in paperwork and footwork.

“It’s not the position that bothers me. It’s the $250 a week, $1,000 a month,” noted Council member Faye Word.” Council members Curt Estes and Hamlett agreed and City Attorney Sharon Howard suggested that the council go into an executive session to discuss the pay scale before voting.

Upon returning from a short executive session the second reading of Ordinance # 2018-19-08 amending the Alcohol Beverage Control Ordinance # 2016-18-02 was voted on. Council members Wayne Wilson, Curt Estes, and Austin Bragg voted against while members Teresa Hamlett, Cathy Nunn, and Faye Word voted for it. The tie-breaking yes vote was then cast by Mayor Doug Smith, thus approving the ordinance.

The second reading of Ordinance # 2018-19-09 creates the position of City Alcohol Beverage Administrator pursuant to KRS 83A.090. This ordinance allows the creation of the City ABC position discussed in the previous ordinance 1 (b). This reading was approved with a vote of 4-2 with Wayne Wilson and Austin Bragg voting no.

The first reading of Ordinance #2018-19-10 amends the budget for FY 2018-2019 to include the funds for the salary of the newly created position of City Administrator and adds a salary for the ABC Administrator. The ordinance was approved by a 6-0 vote amending the budget in the amount of $11,000.

No specific salary was given for the position, but it was noted that it would be less than the previously stated $250 per week. The second reading of Ordinance #2018-19-10 will need to be scheduled. You can read the first two ordinances in their entireties elsewhere in this edition of The Herald-News.