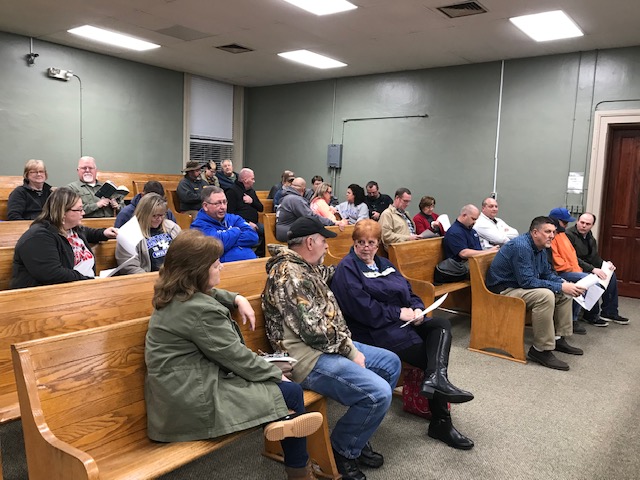 Shown is the large crowd at the fiscal court night meeting.

The crowd was one of the largest at the meeting in a while.  After the agenda and all bills to be paid was approved the different departments started giving their reports.

The magistrates voted to approve the rehire or reappointment of the county employees for the next year.

First up was the road department with Greg Carroll telling the court that the back hoe that turned over was back fixed and ready to be used, just in time because the old back hoe needed a radiator and cooler put in to the tune of about $2,300.  He also stated the automatic gate opener parts were starting to come in and would be installed as soon as they could get it all together.  The automatic gate is not a luxury for the department but it could actually be a lifesaver.  Last year when the ice was coating the roads the road supervisor Ray Page was pinned between the gate and his truck, luckily his wife was in the vehicle and was able to move it away from him.  All this because they have to get out of the vehicle to open the gate, so with the new system they will be much safer and not have the chance of getting hurt just trying to get to work to make the roads safe for the community.

Terry Massey the new Emergency Management director said they had 28 runs in the last quarter of 2018 that ranged from fires to auto accidents to trees being down.

Sheriff Shane Doyle reported the department wrote 44 citations with about one half being warrants served and the other half being new runs.  He reported that Deputy Skaggs hit a deer on Christmas Eve in his cruiser and later on that same day he hit a patch of black ice and ran into a guard rail.

County Clerk Kevin Alexander told fiscal court that over the past year his office had turned over $304,792.22 in excess fees and he still would have about $67,000.00 extra to turn over to the county.

The jailer said there were 21 county inmates with 1 on home incarceration.

Rhonda Clemmons is hoping the lobbyist that was hired by the SOKY Film commission will do some good in Frankfort to get the tax incentives changed back to what they were when the two films were made in Edmonson County.  There are three films waiting to be produced but unless the government changes something we will lose those films to Georgia.  So anyone can write letters and let Frankfort know who much those films helped our community economically.

The next fiscal court meeting will be January 28, 2019 at 9:00 am in the upstairs court room in the court house, everyone is welcome to attend and is encouraged to do so.