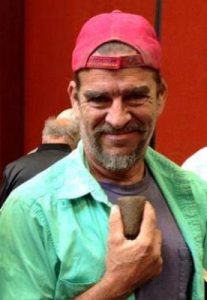 Artifact expert David Kussmaul’s lifelong fascination with the past is second nature, and now his passion has landed him a spot as a published artist in the Overstreet Arrowhead Guide.

An internet in artifacts

“I always dreamed of finding the next big dinosaur and life in all its forms past and present have been my lifelong love,” he said.

From an early age, he was especially drawn to the Native American culture.

Kussmaul grew up in a town known as the Clinton redskins. There was a neighboring town called Tecumseh and he says that played a big part in my early love of Indians.

“The boy scouts Order of the Arrowhead again pushed my admiration for Native Americans. Me being a tree hugger, it isn’t hard to see why I admire their ways,” said Kussmaul.

David was first and foremost a fossil hunter in the beginning.

“Moving here in ‘96 was a trial run for fossil hunting as I remember a trip filled with fossils on lake Cumberland as a 9-year-old,” said Kussmaul.

David has been living in Metcalfe County for about three months, happily snatching up every fossil he could spot when he showed them to some locals. He was a bit surprised to discover such finds were commonplace here in Kentucky.

“They asked what I did with all the arrowheads I must be finding in my fossil hunts. I always thought they were all picked up so I told them that. Laughter was the response,” he said.

Unlike where he grew up, Kentucky, known as the dark and bloody grounds where so many tribes came to hunt, soon proved to be a treasure trove for an artifact aficionado.

“The very next time hunting fossils in the creek I decided to keep my eyes out for arrowheads as well. Boom, my first relic. I call her ‘the hook’,” he said.

The road to having an illustration published

“I went to the library first and devoured everything relic. Next the bookstores,  where through the years I have gathered my own relic library,” he said.

Ironically, of the first books Kussmaul found was the 3rd edition of the Overstreet Arrowhead Guide, and he was fascinated.

“I spent the next few years writing and illustrating a book on relics,” he said.

Eventually, his love of illustration won out and he concentrated only on the drawing part. 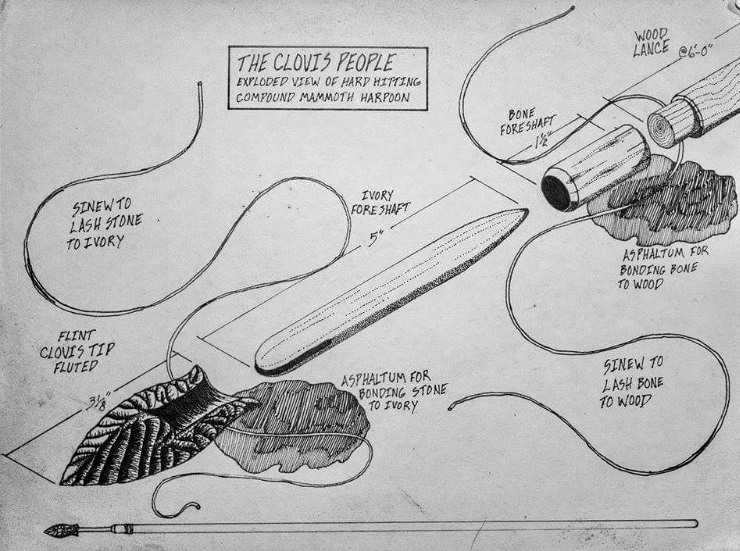 “The drawing that was published was drawn in ‘98 when I was just trying to understand how the Clovis people were able to bring down elephant-sized mastodons in our backyards so very long ago,” said Kussmaul.

The drawing is based on relics found here in Kentucky and knowledge of Eskimo whale hunters of the northwest coast.

“The harpoons were made of several parts, but were necessary to penetrate the blubber of whales,” he said.

The drawing was seen by the President of the state’s Archeological Club on a visit to see David’s extensive collection in 2011.

“He asked if he could use the drawing in the 50th-anniversary issue of the club’s mini magazine. I was tickled pink to have it published,” he said.

But, that was just the beginning.

About a year ago Kussmaul was approached again, and this time by a much more prominent publication: The Overstreet Arrowhead Guide.

“They wanted to publish the drawing in the next Overstreet,” he said. Needless to say, he was ecstatic.

“I was beside myself and agreed immediately. It was so simple it would seem. Lawyers and forms became involved. I signed the forms and waited patiently for word of the publishing,” Kussmaul said.

David found the publication had gone through via online contacts.

“It was about a month ago when folks began to congratulate me. An online friend actually sent me a copy a couple of weeks ago and there in the table of contents was my name,” he said.

“It is hard to describe that feeling.”

As both a book and relic lover, it has long been a dream of his.

“But to see it in there, the most popular book on American relics in the world, well… wow,” said Kussmaul

“It said to turn to page 43 and I did. There in all my humbly penned glory was my explanation of the first people in Americas hunting technique. They also credited me here and Edmonton as my home.

“I love that they did that as I have felt like Edmonton was my home for some time now. Now it’s official.”

This major milestone is something Kussmaul will relish for a long time but that is not to say that he isn’t working towards other goals.

When asked if he plans to get more illustrations published he replied, “I sure do. Every chance I get.” 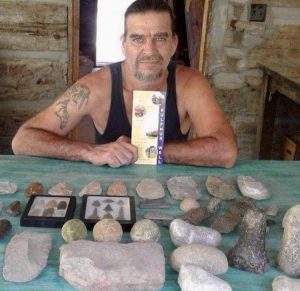 Kussmaul has an extensive collection of artifacts. 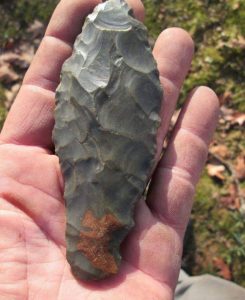