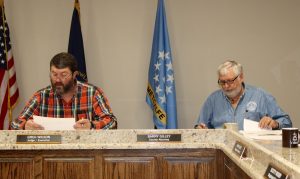 The Memorandum of Understanding between T. J. Samson Community Hospital and Metcalfe County was approved at the December 21st meeting of the Metcalfe County Fiscal Court.

“It is exactly what we had talked about with the hospital and I still can’t say enough for TJ stepping up and helping us out with this issue. Now hopefully the ambulance service will continue on without any questions or hesitations,” stated Judge/Executive Greg Wilson.

The agreement states that TJ shall reimburse Metcalfe County for sums contributed to the Ambulance Service deficit allocation in excess of $150,000 annually, but not on sums utilized on capital expenditures and/or expenses. 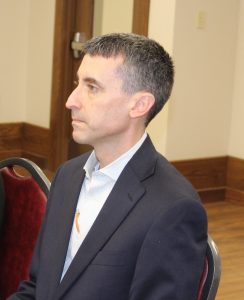 Chief District Engineer Joe Plunk was on hand for the purchase of the Toll Plaza property by the Kentucky Transportation Cabinet, Commonwealth of Kentucky. PJ Martin/The Herald-News

The members of the fiscal court agreed to the sale of the Toll Plaza building back to the Kentucky Transportation Cabinet for the amount of $45,000. The same amount that Metcalfe County paid for the building in 2009. Joe Plunk, Chief District Engineer, Kentucky Transportation Cabinet was in attendance with the deed to transfer the 2.01 acres back to the Commonwealth of Kentucky. Plunk pointed out that the building is in a state of disrepair and, “We will have a contractor, sometime in the spring, who will demolish the building and get rid of what is basically an eyesore.”

The building previously occupied by the Metcalfe County Sheriff’s office was also declared surplus property and is to be listed with Dile Realty. Wilson explained that money from the sale of the surplus property, “Would help, I think, give the county treasurer some ease going into the next year.” 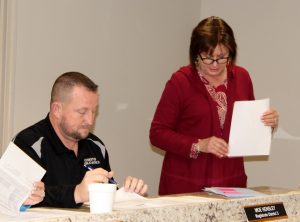 Metcalfe County Clerk Carol E. Chaney presented the 2019 Budget and Order setting maximum amounts for deputies and assistants to the fiscal court members. The amount of estimated receipts is $2,030,400 with disbursements of $198,800 which leave an excess fee balance of $40,600. The maximum amount for salaries is $171,000 for 2019. “That’s an increase of 6 thousand dollars from 18 [2018]. I don’t know that I will use this, but as you know, I had one employee two years ago that retired and I did not replace them. There might come a time that I might have to have a part-time to come in. I’ve got enough built in here to do that if I need to,” explained Chaney.

The final payment request of $119,128.67 was received from Scott, Murphy, and Daniel LLC, but due to a list of 25 items in the government center building being incomplete, the amount of $16,000 is being withheld until all the items are finished. The remaining $103,128.67 of the amount is being paid.

The lease renewal for Golden Years Adult Day Care is being held over to the January meeting to allow the new Judge/Executive and magistrates to be involved.

Magistrate Scotty Mosby was absent due to injuries sustained in an accident.