A Glasgow native physicist has spent decades developing alternative theories of gravitation and gravitational waves that will soon be put to test by new definitive experimental results that will either prove or disprove his theories with no equivocation. His theory will sink or swim.

DT Froedge spends his time working on a wide range of physical phenomena spanning from sub-atomic particles to the behavior of the Universe. However, his interest is geared towards physics that are not mainstream beliefs.

Froedge has earned degrees in Physics from Western Kentucky University and University of Tennessee. He finished his Doctor of Philosophy (PhD) academics in Physics and taught at Auburn University.

Papers related to his work have been presented at the American Physical Society (APS) almost yearly, to a generally skeptical audience, which offers an alternative to the standard view of collapsed stars as black holes.

“It seems nearly everyone that has worked in General Relativity knows there are serious flaws with it, but most researchers leave those problems alone,” Froedge said. He added that it works perfectly at low levels of gravitation, but when it moves to higher and higher levels, the approximations and differences with reality should start to show up.

Froedge’s theories give predictions that contrast sharply with the expected results of two new major experiments, and he will soon see whether those are right or wrong as early as January.

No image has ever been produced of the black hole at the center of the Milky Way but merely predictions of what it looks like. Froedge believes the image will reveal a spherical object as opposed to the mainstream expectation of an accretion disk, a crescent shaped shadow previously predicted by the Event Horizon Telescope (EHT) team.

The EHT team is currently sifting through significant amounts of data from their colossal project, which is a virtual radio telescope with a diameter the size of Earth. Basically, many radio telescopes are placed around the world linked together with timing and computers, and operates as one big telescope roughly the size our planet.

Currently, as some data is slowly being revealed, the EHT measurements are conforming to be more of what Froedge expected them to be.

If it is a black hole, the team expects to see an accretion disk surrounding a black dark shadow. The radiation originates from a hot swirling gas ring surrounding the black hole.

But Froedge expects to see a dim star.

In 2015, Froedge presented a paper to the APS, which also happened to be the centennial of the General Relativity theory, where several hundred physicists and experts on General Relativity and black holes were present. The paper, “Image Comparisons of Black Hole vs. Neutron Dark Star by Ray Tracing,” details his prediction and the most recent released EHT data is nearly exact to his three-year-old prediction.

The EHT team has spent nearly two years collecting data and processing an image, which is expected to be released in January.  The soon to be release first image of a black hole will probably mean a Nobel Prize for the team leaders.

In addition to the EHT, there is another major experiment investigating the nature of black holes. The Ligos Gravitational Wave Detector has already detected gravitational waves, which landed Nobel Prizes for those team leaders. In January, there will be three operating detectors of Ligos, located in Washington, Louisiana, and Pisa, Italy, that will triangulate stellar positions.

In the General Relativity theory, these waves are what are known as space-time ripples. If the Glasgow Physicist is right in his predictions, these waves will instead prove to be electromagnetic waves in origin.

“If they are gravitational waves, or space-time ripples, the waves will go directly through the Earth as if the Earth isn’t even there. If I am right that they are electromagnetic, there will be detectable attenuation and timing issues as they bend around the Earth,” Froedge said.

With gravity waves, there will be no attenuation and the timing should have perfect triangulation when the Virgo station joins the array in January. Ligos will distinguish as to whether the waves from collapsing binary stars are ripples in space-time or are actually consistent with Froedge’s prediction of being electromagnetic in origin.

Froedge, who predicts these black holes to be Neutron stars, said, “Neutron stars are very dense, and compact, but it isn’t a black hole, and I don’t expect light to be unable to escape.”

“A high percentage of light leaving the surface is bent back to the surface, thus the star is somewhat dark, but light leaving at a high angle escapes and isn’t trapped; therefore, there is not what is known as a black hole.”

Froedge said the black hole is a creation of General Relativity and the result of the end of the line when gravitation is extremely dense. “Einstein had said he thought it to be a mathematical artifact, and I believe that to be true, I think it is the projection of a theory beyond its limits,” he added.

Between the two major experiments, the EHT and Ligos, the world will soon see the definitive answer to the long held mystery of what we call black holes. Only time will tell if Glasgow will become home to the one physicist who has publicly gone on record with a prediction that black holes are completely different from the theories of Einstein’s time, or just another theory to be taken down.

Froedge’s collection of papers can be viewed at http://www.arxdtf.org/ and the APS Presentation at http://meetings.aps.org/Meeting/APR18/Session/X13.2 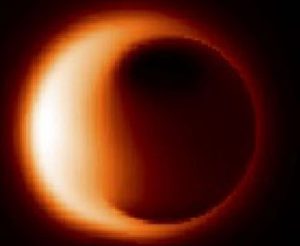 The above image is what the Event Horizon Telescope team expects to see when the first image of what we know of as black holes is released as early as January 2019. Photo courtesy/EHT. 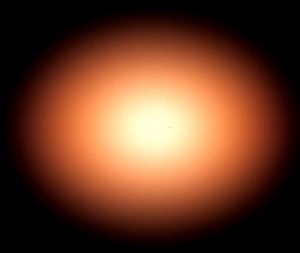 Glasgow Physicist DT Froedge expects the image results to look like the above, which is a representation of a Neutron Star. Photo courtesy/DT Froedge.