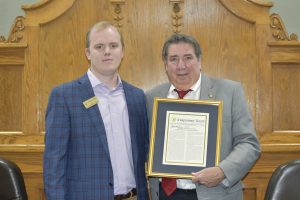 Mr. McCONNELL. Mr. President, it is my privilege to salute my friend, Hart County Judge-Executive Terry Martin, as he completes his career of public service. Since he took office in 2005, Terry has dedicated nearly every waking hour to his constituents. As he begins the next chapter of his life, I would like to remember his lasting record of success and to express my sincere gratitude.

After graduating from Western Kentucky University, Terry spent 27 years in education. He was a teacher, an administrator, and a coach helping to guide the next generation.  In 2005, Terry was appointed by the governor to serve as Hart County’s judge-executive, the leading elected official in county government. For Terry, entering public service was like joining the family business. His father, Elroy, was a city judge, a local fire chief, and a county magistrate. His brother, Glenn, was also a magistrate and part of this noble family tradition. The drive to serve his neighbors just seems to run in Terry’s veins.

In the county’s top job, Terry had a lot of responsibilities. With a goal to provide essential services to the residents in a fiscally-responsible way, Terry consistently went beyond the typical job description. I hear he would even drive a snow plow during winter storms. As a former county judge-executive myself, I know firsthand how difficult a job this can be. Whatever challenge he may have faced, Terry consistently excelled and earned the trust of his constituents and his colleagues.

During his time in office, I have enjoyed working with Terry on a number of projects to help Kentucky. We collaborated with the Green River Valley Water District to deliver drinking water to rural parts of the county. Terry also identified the alarming frequency of collisions along Interstate 65 in the county. Together, we prioritized resources to expand the highway, promoting safety for both families and commercial travelers.

As he begins his well-deserved retirement, I am confident Terry looks forward to spending more time with his loving family. With Carmen, his wife of 40 years, they are proud parents to Lynlea and grandparents to Lyndon and Gwyneth. I wish the entire Martin family the very best as they take this next step together. Along with all those who have benefited from Terry’s service to Hart County and to our Commonwealth, I would like to say thank you. He’s been a good friend and a strong leader for Kentucky. I urge my Senate colleagues to join me in congratulating Judge Terry Martin for a job well-done and wishing him a fulfilling retirement.