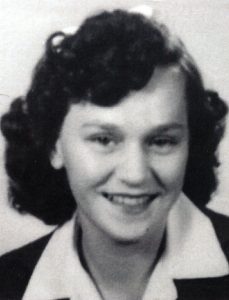 Wilma Bryant Groce, 95, of Glasgow, died Monday, December 17, 2018 at her home in Steeplechase Estates.  She was born in Monticello, KY to the late Bertha and Benjamin Bryant who moved to Glasgow when Wilma was 15 years old.  She was married to Jack Groce in 1943 who served as Captain of the Glasgow Fire Dept. for 20 years.  Jack preceded her in death in 1987.  Before returning to Glasgow in 2017 to be near her extended family, she lived for 47 years in Louisville, KY where she spent her most creative years performing many acts of kindness for her numerous friends and neighbors.

Wilma is preceded in death also by her beloved sister, Shirley Bryant Church and 3 brothers, Ralph, Earl and James Bryant.  In Glasgow, she is survived by her two sons, Johnny Douglas Groce and Jacob S. Ayers her primary caregivers; her nieces and nephews; Deborah and Leland Cox; Nikkie and Chad Poland and sons Lane and Charlie; Becky and Dannie Honeycutt; Terryn and Travis Varney and son Hudson; Regina and Steven Murphy and Taylor, Caroline and Will Thomas; Robert “Robbie” and Penny Church and children Seth Thomas, Clay and Chessa Church; Chelsea and Spencer Burton and Children Devyn and Bralyon Burton; Elizabeth and Dale Copas and son Wade and family; a niece who lived as a daughter for 4 years with her, Zula Scott and her daughter Marla Leatham.

In Wilma’s beloved adopted hometown, Louisville, she is survived by her devoted cousin and caregiver Pauletta Dick and daughter Becky; her longtime loving friends Mary Catherine Brutscher and daughter Andrea Brutscher, Debbie Fieldbaum, Craig Stickler, Elizabeth Corman and daughter Ella Corman Stickler, all who are traveling great distances to attend the celebration of life service.  From Indiana she is survived by an especially devoted niece Jan McCombs of many years.  In Northern Kentucky she leaves with special fondness her nephew Michael Dick and daughter Calley.  From her many years as a member of the Glasgow Baptist Church she leaves her two beautiful friends, Ledean Hamilton and Ann Grant Underwood and her very special friend since her first teenage years here, Bea Ward whose devotion over the years has always been like that of a sister.  From Bowling Green, she leaves a friend so special her face would brighten with a smile and a glint of happiness in her dimming eyes and make an otherwise dull day a day to remember.  She always spoke often and asked about another visit from Brenda Bunch.

Funeral services will be 2:00 PM Sunday, December 23rd at A. F. Crow & Son Funeral Home with burial in the Glasgow Municipal Cemetery.  Visitation will be Saturday from 4pm until 8pm and Sunday morning after 9am until time for the service.