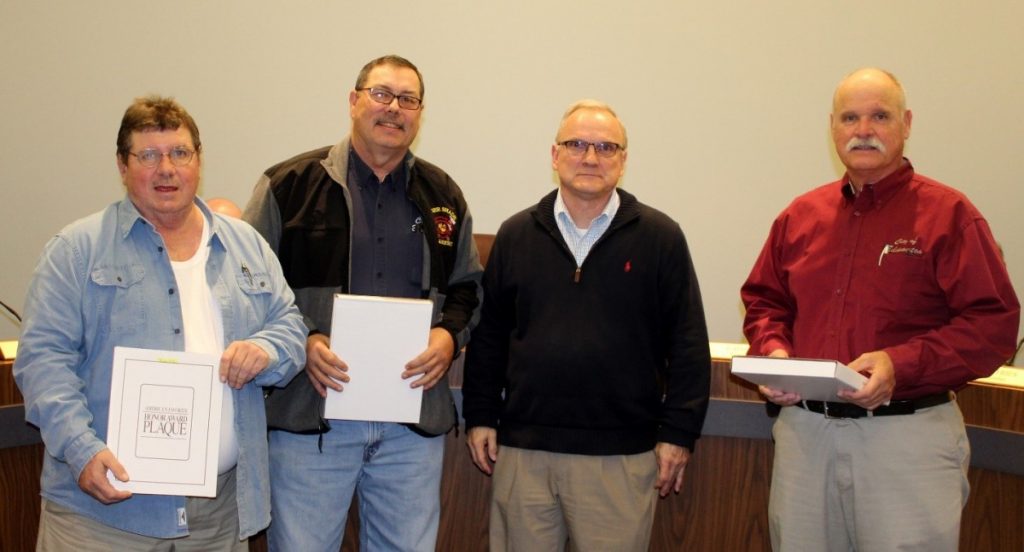 A feeling of sadness hung in the air at the last Edmonton City Council meeting of 2018 held on December 3. This was the last meeting for three of the council members, Billy Jeffries, Wendell Sexton, and Ronnie Miller, and also Mayor Howard Garrett.

Mayor Garrett presented Jeffries, Sexton, and Miller with plaques commemorating their service to the City of Edmonton. Next, Regional EMS Director Gary Fancher presented Mayor Garrett with a plaque on behalf of the 911 Governing Board for Barren Metcalfe County for his 25 years of outstanding and dedicated service.

Council member Curt Estes on behalf of the council presented Mayor Garrett with a clock as a thank you for his many years of service and dedication to the city of Edmonton. 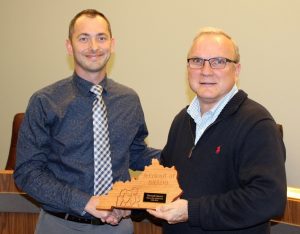 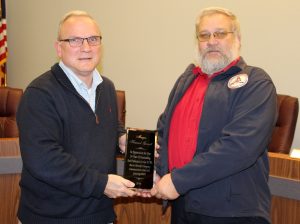 The 2nd reading of Ordinance 2018-19-05 to amend the budget for FY 2018-2019 in the amount of $11,877 was approved The money which consists of donations from vendors at the Bicentennial Celebration was used to off-set celebration expenses.

The council approved the 2nd reading of Ordinance 2018-19-06 to amend the budget for FY 2018-2019 in the amount of $1,000 donated by Edmonton State Bank to the City of Edmonton for the Edmonton Fire Department. ESB also donated $1,000 to each of the other fire departments within the county.

After rebidding water and gas meters, the council received a single bid from Core & Main of Bowling Green, KY. The cost for each gas meter is $98.50 (instrument dial for electronic read). The cost per water meter is $183.86 (meter and reader) and $49.08 (meter only). The bid was approved.

Counsel member Sexton asked, “Is this compatible with what we have been purchasing? To which Public Works Supervisor Howard Dickson replied that it is.

Council member Cathy Nunn inquired, “What is usually the life of the meters?”

Dickson answered, “We’ve got gas meters (old American meters) that need to be changed. They have been here ever since I’ve been here. I’ll soon be here 21 years.” He added, “We’re changing them out little by little.” The replaced will take approximately 3 more years to complete.

The Public Service Commission recommended that updated gas operations, maintenance, and emergency manuals be created. According to Zach Judd, Gas Department, “Our old manual was about 20 years old. We had made several amendments to it.” The council approved the adoption of the new manuals.

A ‘gas removal letter’ was also approved. The letter will be used in situations concerning abandoned (over 5 years) gas connections. The letter gives the city the right to remove the line after the property owner has been contacted. This is to be used as a safety precaution for disabling forgotten/abandoned gas connections.

Parks Director Page Edwards stated that the park is being prepped for the Christmas decorations which are being installed. Also, applications for the youth basketball program which is pre-school through 8th grade are currently being taken.

Edmonton Fire Chief Jerry Clemmons advised the council that no fire department report was available due to computer software updates.

The council went into a 15 minute executive session to discuss property acquisition, but no actions were taken.