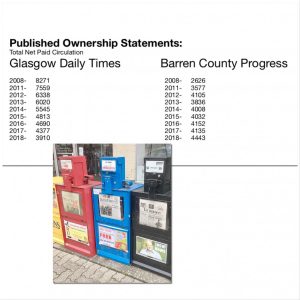 Barren County Judge/Executive Micheal Hale made a motion in last week’s Fiscal Court meeting to seek declaratory judgment from the Barren Circuit Court on which local newspaper should be used by the county for legal advertisements.  Hale said the decision was made after being advised by County Attorney Jeff Sharp following a closed session.

Although Sharp chose to pass on making the decision, he briefly referenced later the Kentucky Revised Statute 424.120 section (d) that Hale included in his motion, which states: If, in a publication area there is more than one newspaper which meets all other listed requirements in the KRS; the newspaper having the largest bona fide paid circulation as shown by the average number of paid copies of each issue as shown in its published statement of ownership as filed on October 1 for the publication area shall be the newspaper where advertisements required by law to be published shall be carried.

Sharp told several members of the press that the Barren County Progress had submitted evidence (actual published ownership statements for both the Glasgow Daily and the Barren County Progress) indicating they have the proper numbers to be the newspaper used for public advertising.  The statement Sharp references actually detailed the paid circulation for each newspaper and that this year was the first time the Barren Progress surpassed the Glasgow Daily Times in average bona fide paid circulation.

A quick review of these statements and others published in prior years will show that the Glasgow Daily Times has lost thousands of readers in the past decade while the Barren County Progress has remained steady and shown slight consistent growth during this time frame. The ownership statements for the GDT showed a net paid average in 2008 of 8,271 and the BCP only had 2,626 at the time.  Now the 2018 publishers statements show that the GDT has fallen to 3,910 and the BCP has grown to 4,443.*

There are clear definitions inside the newspaper industry that defines a legitimate paid issue and it seems the GDT wishes to extract numbers, and introduce questions that both publishers should understand.

The average paid circulation is a means to estimate reach for advertisers.  Advertisers need a clear number for knowing their reach and boundaries.  All Jobe papers are county specific, no Barren County Progress newspapers are sold in news stands outside Barren because Jobe owns those community newspapers as well; while the GDT has single copy outlets in some surrounding counties.

The GDT has managed to hold on to a higher subscriber base while the BCP showed initial growth in single copy and recent increases in home delivery; all the above combined make up the laws referenced bona fide paid circulation.

The motion passed unanimously with all magistrates in attendance except for Trent Riddle who immediately left following the closed session and before the vote.