Friendship kept Bush coming to Kentucky. He attended Derby, drove a tank, got a dog. 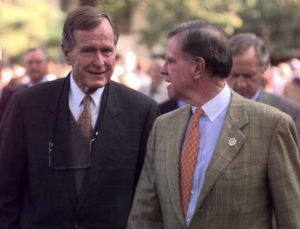 George H.W. Bush walked in the paddock at Keeneland with friend Will Farish, owner of Lane’s End Farm, in October 1997.

Former President George H.W. Bush and his wife, Barbara, were no strangers to Kentucky, thanks to their nearly six-decade friendship with William Stamps Farish IIIand his wife, Sarah, of Versailles.

Bush, whose funeral is Wednesday in Washington, visited Lane’s End Farm in Woodford County many times. The Bushes attended several Kentucky Derbies and races at Keeneland with the Farishes. They dedicated three Lexington buildings and headlined several Republican fundraisers and rallies in the state.

The Farishes gave the Bushes their famous White House dog, Millie, and their springer spaniel sired her litter of puppies. That was big news in what the former president would have called a “kinder and gentler” era of presidential politics.

In 1987, when he was finishing up his second term as vice president and campaigning for the top job, Bush made a trip to Fort Knox, where he got to drive an M1 Abrams tank and do a two-mile run with a group of soldiers

At the end of the run, a slightly winded Bush congratulated the troops. “Now run a couple more and take the rest of the day off,” he quipped, according to the Herald-Leader archives.

The Bushes attended their first Kentucky Derby in 1983, a few years after the Farishes moved here from Houston. Arriving at Blue Grass Airport, the vice president was presented with a horseshoe once worn by the 1973 Triple Crown winner Secretariat.

“I wonder whether this is like the flags that have gone to the moon?” Bush joked. “There are about 18,000 of them.”

Farish, who turns 80 in March, was a stockbroker and became a successful Thoroughbred breeder. But most of his wealth came from inherited oil fortunes. One grandfather founded Humble Oil and was later president of Standard Oil of New Jersey; his other grandfather ran Sears, Roebuck & Co for many years.

Bush and Farish became friends in Houston in the early 1960s. They hunted quail many times over the years at Farish’s 10,000-acre Lazy F. Ranch near Beeville, Texas. When Bush was elected vice president in 1981, he put his assets in a blind trust managed by the investment firm W.S. Farish & Co.

While in Kentucky during the 1983 visit, Bush attended a Republican fundraiser at Xalapa Farm in Bourbon County. It was supposed to be held in The Mill, a stone building along Strodes Creek that owners Lillie and Peter Webb used for parties. But the event was moved to a tent after heavy rains caused the creek to flood The Mill.

The Bushes returned for other Derbies, and in 2000 brought their son, George W. Bush, who was then running for president.

But Bush wasn’t the Farishes’ most famous house guest. Queen Elizabeth II stayed at Lane’s End several times between 1984 and 2007. Those two friendships sparked rumors that Farish would become U.S. ambassador to Great Britain during the Bush presidency. But that didn’t happen until the younger Bush was elected. Farish was ambassador from 2001 to 2003.

Barbara Bush, who died April 17, came to Lexington in 1984 to dedicate a branch library. After she was given a Calumet Farm jacket, she asked with a laugh, “Now what will I ever tell my friend Will Farish?”

The Bushes came to Lexington in 1985 for the dedication of the Lucille Parker Markey Cancer Center at the University of Kentucky.

Barbara Bush returned in May 1990 to give the commencement address at Southeast Community College in Harlan County and again in September 1992 to help open the new Carnegie Center for Literacy and Learning in the old Lexington Public Library building in Gratz Park. Farish’s foundation gave $500,000 toward the circa 1904 Carnegie library’s renovation.

About 1,200 people attended the Carnegie Center event, half of them school children. Then Barbara Bush went to Fayette Mall, where she read the book “Arthur Meets the President” to second- and third-graders from Stonewall Elementary.

The Farishes gave Millie to the Bushes in 1987 after the death of their beloved springer spaniel, C. Fred Bush. Two years later, Millie was mated with the Farishes’ dog Tug Farish III and produced a litter of puppies.

Millie was credited in 1990 as being the author of “Millie’s Book,” which gave a dog’s eye view of what goes on at the White House. It reached No. 1 on a New York Times bestseller list and raised nearly $900,000 to promote literacy.