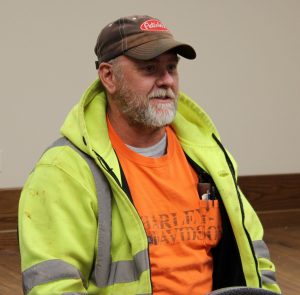 Vernon Engle of B & B Communications giving an update on the communication tower.

“K. L. Woodland Management, Inc. from Princeton, Kentucky has chosen a location out on highway 90 to locate here,” announced Judge/Executive Greg Wilson. The owner Brett Schultz had been in contact with Wilson for several months while searching for the right property.

Schultz purchased property near the county line where the Biomass plant was previously located. Their plans are to start out with 6-9 employees and increase to around 21 at full operation. The sawmill will saw timbers up to 40 feet long, using about 5 semi loads of logs per day, and using logs which are usually considered low grade. The products will be manufactured on site.

Work is scheduled to start on site for the1.4 million dollar project in the next few weeks. Wilson explained that the products are mats using timber which can be rolled out on the ground to enable the use of heavy equipment on the soft ground.

After waiting months for a reply, the county has been awarded the amount of $2,000 for the Kentucky Spay/Neuter Program from the Kentucky Department of Agriculture. “It’s been maybe ten years since we got 2,000 dollars,” exclaimed Judge/Executive Greg Wilson. Although the program has changed and requires a match, Treasurer Vickie Stephens explained the election year restriction and the county was approved without the match. As soon as the funds are received an announcement will be released to the media.

“We’ve got 80 feet of the tower up and waiting on the weather now,” stated Vernon Engle of B & B Communications. Engle said that he had received several comments that the tower is much larger than was expected. EMS Director Emory Kidd asked Engle if the tower was expandable to which Engle replied that it is expandable 40 feet at the top, “That’s the way the bid was written.”

Engle stated that he is donating coaxes cable to hook the radio equipment up and also a day’s labor to put install it on the tower. He is also going to check on possible loose connections on another tower while in the county.

Magistrate Moe Hensley inquired as to the status of the ambulance service contract with T.J. Samson Community Hospital. Wilson replied that the hospital’s attorney is working on the contract and getting it ready to send to County Attorney Barry Gilley.