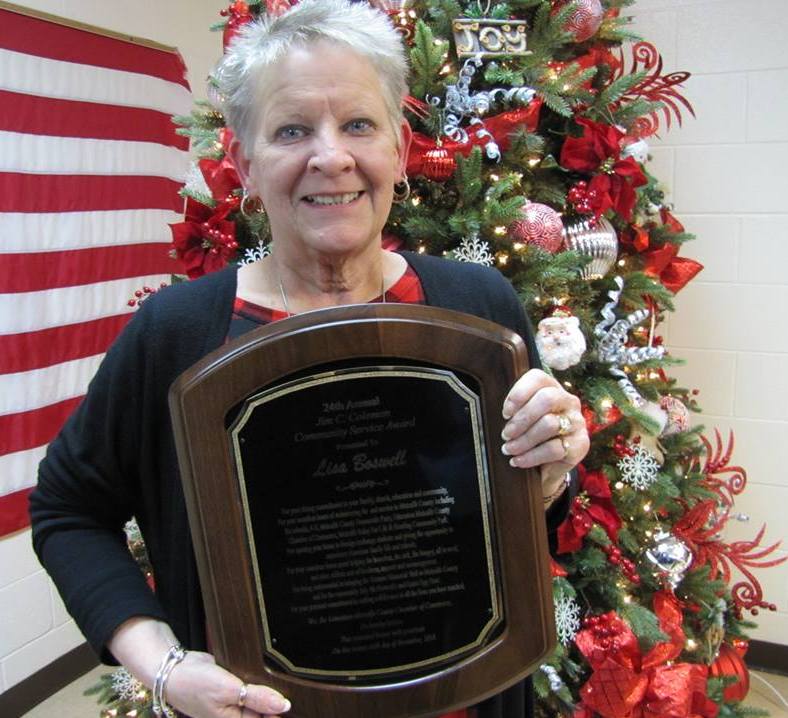 Lisa Olson was born in Sioux Fall, South Dakota and was the youngest of a large family. After her father passed away when Lisa was in her early twenties, she moved to Tennessee with a friend. She worked for Po Folks in accounting and at night was a bartender in a tennis club often frequented by country music stars. Curtis Boswell was the facilities manager there. Lisa and Curtis soon moved to St. Petersburg FL. They married in Nov. of 1986.

In or about 1998, Curtis got a job with a company located in Glasgow, KY and they moved. Curtis and Lisa liked Metcalfe County better for raising their child, Alex than Glasgow when she came to view some homes for sale and saw a community that helped each other. Also, Lisa’s dad always told her to live east of where she worked. He said that way she would never have the sun in her eyes when traveling back and forth to work!

The job in Glasgow was not to Curtis’s liking and he returned to working for the previous Florida Company as a field engineer. He spent many years traveling all over the world. He was an engineer who specialized on the machines that packaged the medicine. He also designed and worked on different packaging for batteries. When Alex was a kid he would bring home boxes of M&Ms that were in blister packs. They used M&Ms to test the machines. One of the Boswell’s elderly neighbors told others that Curtis was into the drug business.

She served on the Edmonton Metcalfe County Chamber of Commerce Board of Directors and as President for two years. The Chamber was struggling financially the first year Lisa was president and was looking for fundraisers. Lisa suggested a Duck Race and explained that they had a hugely successful one in South Dakota. The board members and officers looked at each other and declined comment!

The following year, the finances were even direr and once again Lisa mentioned a Duck Race as a fundraiser. Since the chamber balance at the beginning of that year was so low that some dues HAD to be collected before bills were paid, the board voted to have a Duck Race. The first year, 1,000 ducks were sold and the chamber netted over $4,000. A windfall for the budget! The board decided if 1,000 was a sellout, 1,500 would be sold the next year! The chamber has conducted the Duck Race for many years and it continued to be the main source of income other than dues.

In August of 2013, Lisa was hired as an interim director of Bowling Community Park. She was hired full-time Park Director later that year. As with everything else Lisa Boswell undertakes to do, she gave the job 110 percent and the park grew. She reopened the homeless shelter and goes beyond the call of duty in helping persons who utilize the facility. She continued the Free July 4th Celebrations and the Easter Egg Hunts. She had the dilapidated concession stand and old restrooms/showers torn down. She realized a bigger food pantry was needed and arranged for it to be built.