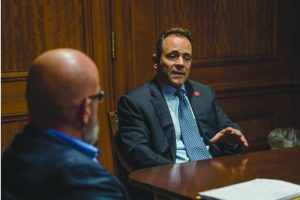 For the second year in a row, Governor Bevin has invited members of our newspaper company for a personal interview in his State Capital office in Frankfort. Publisher Jeff Jobe and his team took Governor Bevin up on his invitation to interview last week. With no script, like the year before, the Governor was open to discuss any topic of our choosing.

Jobe accepted the responsibility of bringing only the truth back in the reports. Not only because of a commitment to this industry and to the governor, but also for a sincere desire to understand what is reported. “It’s important that I can grasp the subject and understand it myself, in order to explain it to our readers in Barrren, Butler, Edmonson, Hart, Metcalfe, Monroe, and Russell Counties,” Jobe explained.

When talking with Governor Bevin about truth in the media he said, “The answers are actually ignored all together, if they don’t go along with their narrative.” To achieve clarity and a better understanding of the, so-called, tougher questions they are most often avoided, because it requires more of an explanation than a headline or a soundbite can offer. These headlines and soundbites that are often chosen to define a person’s character are misleading. This is not the result Jobe Publishing strives to achieve. We only print the truth, nothing more, nothing less.

Governor Bevin held nothing back in his answers to each topic brought before him. The fluidity of his words seemed to roll on effortlessly. It was apparent Governor Bevin took honor in this opportunity to finally reveal genuine honesty in his thoughts and beliefs. Time seemed to pass quickly during the hour-long meeting as several subjects were discussed such as: successes being seen in economic development, budgeting challenges, stewardship to our state, recognizing board seats being bought through political corruption, and the deception thrown in his lap from self-serving teacher unions. The moment Governor Bevin talked of a personal experience an ambience of passion and love caroused the room. He talked of his work helping children in adoption programs and an early experience he and his family had as well. He was very unapologetic on a specific matter involving the newspaper industry, in which will be discussed in more detail when the weekly series of this interview are released in the newspaper.

It was our team decision to break this meeting down into a weekly series of topics into at least four weeks. We want to allow adequate space and precision for Governor Matt Bevin to speak directly with our readers in South Central Kentucky. With the holidays upon us time and print space are of scarce commodity. This places constraints on our staff during this time; not permitting these issues to be printed until after the holidays.

Look for the first of the series coming in January 2019.