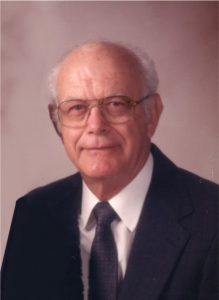 After graduation from Temple Hill High School, Ferrell worked for the Glenn L. Martin Aircraft in Baltimore before beginning his service in the US Army.While serving in the military during WW II, Mr. Arterburn served in the 6thArmored Division of the US Army, 44thArmored Infantry Battalion as a halftrack driver. His unit served for over 20 months in combat. During his combat service he received the Bronze Star for his exceptional bravery during battle.

He retired as the Assistant Manager/Head Tailor of Handmacher/Country Miss Manufacturing Co. after 45 years. Following his retirement, he became an associate with Hatcher & Saddler Funeral Home and continued his service there until September 2018. He was a member of the Glasgow Baptist Church and the Allen Masonic Lodge. He was also a charter member of the Glasgow Auxiliary Police from 1964-1985, serving as Chief from 1972-1985.

Survivors include one son, Dannie Arterburn and his wife, Alice, of Nashville, TN; one granddaughter, Julia Christine Arterburn Russell and her husband, Dennis, of Raleigh, NC; and several nieces, nephews, and other family members.

He was preceded in death by his beloved wife Roxie Jones Arterburn, his parents, one sister Nelda Arterburn, and one brother, Harold Arterburn.

Thanks to all of the Hatcher & Saddler family for their friendship and encouragement. Special thanks to Thomas Harrison and Mary Gillam for their assistance and care.

Funeral services will be held 1:00 p.m. Saturday, December 1, 2018, at the Hatcher & Saddler Funeral Home. Burial with military honors will be in the Poplar Log Cemetery. Visitation will be from 4:00 to 8:00 p.m. Friday, November 30thand after 12 noon Saturday at the funeral home.