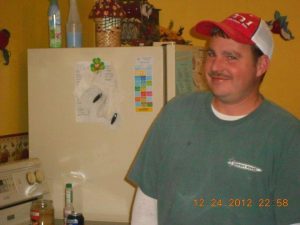 David Boston Crain age 38 of Upton passed away Saturday night, from injuries sustained in an automobile accident on Hwy. 1140 in Upton.   The family takes great comfort in knowing that David was saved by God’s grace at Dorsey’s Chapel Missionary Baptist in Hardin County in 2000 and he later joined Bolton Schoolhouse Missionary Baptist Church.

He was preceded in death by a brother Brandon Crain

David is survived by his wife Sue Ann

One brother-Kerry Crain of Munfordville

Funeral services for David Crain will be 1pm Wednesday, Nov. 14 in the chapel of Sego Funeral Home with burial in the Copelin Valley Cemetery.  Visitation will be Tuesday from 11am-8pm and will continue after 8am Wednesday at the Sego Funeral Home.  The family ask that contributions be given for funeral expenses.

Munfordville, KY  ( November 11, 2018)- On Saturday, November 10th at 5:46 PM (CST) the Kentucky State Police Post 3, Bowling Green received a call for service in reference to a single vehicle injury collision.  The collision had occurred near 11801 Raider Hollow Road in Hart County.  Trooper Anthony Harrison responded to the collision, along with other KSP personnel.

A preliminary investigation has revealed that David Crain (38) of Horse Cave was operating a Ford Ranger pickup when the pickup left the right shoulder of the roadway striking a tree coming to final rest.  Crain was transported to Caverna Medical Center Hospital where he succumbed to injuries sustained in the collision at 7:07 PM (CST.)