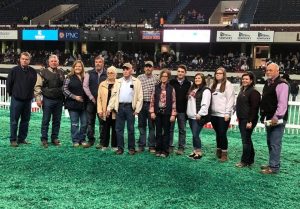 In 1952, C.F. Martin purchased his first Shorthorn heifer and her heifer calf for only $110. From this beginning, C.F. Martin built Martindell Farms, LLC., into one of the largest Shorthorn herds in the United States with more than 300 head on the farm today.

C.F. has dedicated his life to being a farmer, it is the only job he has ever had, farming over 300 acres. He started on his own and now with his family continues as a farmer and cattle breeder, raising registered Shorthorns. Although, they don’t raise crops anymore, they pride themselves on raising good quality hay for their Shorthorns. His farming always played an important role in raising cattle because he believes it takes good nutrition and good genetics to have good cattle.

Martindell Farms, LLC., has exhibited cattle for many years including the North American International Livestock Exposition, Kentucky State Fair, Tennessee State Fair, Alabama State Fair, West Virginia State Fair, North Carolina State Fair, South Carolina State Fair, Georgia National, Kentucky Beef Expo and Tennessee Beef Expo. Through their years of showing, they have 19 Grand Champion banners from the Kentucky State Fair, as well as many banners from the many other fairs they attended. They also have exhibited many division champions from NAILE. In 1983, they owned half interest in the Grand Champion Bull at NAILE, Honeydew Big Red, and later sold him in Denver. They consign cattle each year to Kentucky Beef Expo and Tennessee Beef Expo. Martindell Farms, had a production sale in 2005 and their top selling female was featured on the May/June cover of Shorthorn Country.

Over the years of farming and raising cattle, Martindell Farms, has registered more than 3,500 head of Shorthorns and sold cattle to 27 states and Canada. C.F. has traveled many miles to find genetics to improve the herd. He had been awarded the Century Club membership for many years.

C.F. said, “I didn’t do this all by myself.” He gives credit to his two great sons and a wonderful wife who loves Shorthorns. They enjoyed all the time spent showing cattle together as a family.  He believes it takes a great family to be successful. CF has now turned the farm over to Franklin and Jason to continue the tradition.

CF has received many awards over his many years of involvement in the industry. He was recognized as the builder of the breed in 1998. He was inducted in the Kentucky Cattleman Hall of Fame in 2014 and is honored to be recognized as the North American International Livestock Exposition, Jack C Ragsdale National Shorthorn Show Honoree.