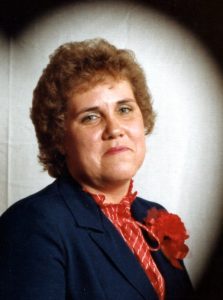 Shirley Faye Sitzlar, age 76 of Glasgow, Kentucky passed away Thursday, November 15, 2018 at NHC Nursing facility, surrounded by loved ones.  She was the daughter of the late Delbert and Derlie Gibson Dobbs.

Besides her parents she was preceded in death by her husband, Ewing Gene Sitzlar; a daughter, Donna Renee Sitzlar; and a grandson, Richard Adam Dobbs.

Mrs. Sitzlar came from a large and loving family, and had many friends.  Caretakers of note were Phyllis Short, Della Johnson, Edna Dotson, Etta Gossett, and Brenda Alexander who provided her with loving care in her final years.

Funeral will be  held at 3:00 pm Sunday, November 18th at the Hatcher & Saddler Funeral Home with cremation and then burial  in Kingston, Tennessee.  Visitation will be after 1:00 pm Sunday at the funeral home.