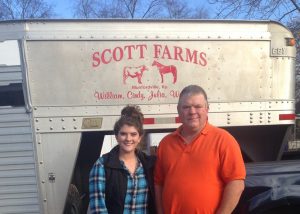 William and Julia Scott haul the shoeboxes from one point to the next. The shoeboxes travel from one destination to the next by volunteers until they are delivered to childen all across the world by the Samaritan’s Purse organization, which is under the direction of Franklin Graham, Billy Graham’s son. 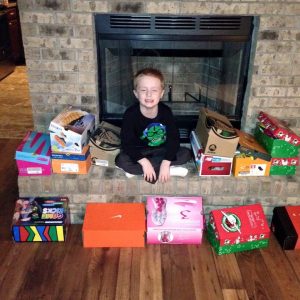 Jackson Buckles has been packing shoeboxes for many years. Jeremy, Sherri, and Jackson Buckles have taken on the shoebox challenge-to pack more boxes each year than the did the year before. It is a family tradition that teaches the true meaning of the holiday season.

Operation Christmas Child is a project that Franklin Graham, son of Billy Graham, has been associated with many years.  Beginning in 2001, Hart County became associated with this tremendous effort.  Can you imagine your child not only being satisfied but beyond excited to receive one small shoebox on Christmas morning?  One small shoebox that is all it takes to make a difference in a child’s life.  What can I fit in a shoebox?  You would be surprised what you can fit in a shoebox.  The boxes are geared toward a certain age group, your decision, and gender, again your choice.  Some people have chosen to stuff a shoebox in someone’s honor or memory.  When Hart County first became associated with Operation Christmas Child in 2001,  529 boxes were collected.  Every box represents one child who received some things they would not have had otherwise.  This past year Hart County collected 2357 boxes!  From 2001, over 18,000 boxes have been collected and distributed.  Hardyville Union Church has been a drop off point for the shoeboxes since 2001.  Hardyville Union will be open from 8:00 AM to 8:00 PM daily for boxes to be dropped off. Leitchfield Crossing Baptist Church is also a drop off point this year.   The boxes are then loaded up and moved to Valley Creek Church in Elizabethtown.  The question is often asked what do I put in a shoebox and when is it due.  The answer is the boxes are due the week before Thanksgiving with the week of November 12-16 being the week of delivering to the church.  On Monday November 19, 2018 the boxes will be moved to the next location.  What goes in the box-small toys, matchbox cars, Barbie dolls, crayons, pencils, bouncie balls, art sets, gloves, socks, mittens, scarves, bandanas, caps, small tool sets, bars of soap,  washrags, small towels.  Do not include:  gum, candy, toothpaste, war related toys such as little military men or play guns or knives, nothing that is liquid that could spill, anything breakable, fruit, seeds, chocolate or medications.  With the United States society, it is hard to believe that a simple shoebox could make such a difference in a child’s life, but it does.  If you have never packed a shoebox, make this year your first experience.  If you have packed one in the past make this year the year you pack two. If you have a question about Operation Christmas Child please feel free to contact Ms. Peggy Sue Avery at 270-528-3698 for specific details.   There is also a website to give you stories, ideas, and specifics about this organization.