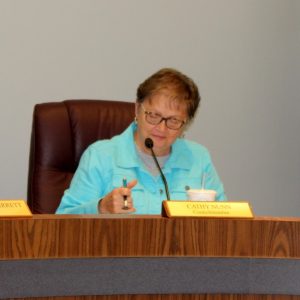 Council member Cathy Nunn asked to rescind the motion that the fire department pay half the utility bills.

Council member Cathy Nunn addressed the council, “I just want to make a motion that we rescind the motion that was made to have the fire department pay half of their electric bill.” The motion was approved unanimously with no discussion. A date was scheduled tentatively for November 27th or 28th at 6 p.m. for the city council, fire department board, city, and county fire chiefs to meet at City Hall.

The first reading was approved on Ordinance 2018-19-05 to amend the budget for FY 2018-2019 in the amount of $11,877. The money which consists of donations from vendors at the Bicentennial Celebration was unexpected. The original budget called for expenses only and the donations received will off-set those expenses.

The first reading of Ordinance 2018-19-06 to amend the budget for FY 2018-2019 in the amount of $1,000 donated by Edmonton State Bank to the City of Edmonton for the Edmonton Fire Department was approved. ESB also donated $1,000 to each of the other fire departments within the county.

Public Works Supervisor Howard Dickson reported that a water line extension was installed on Blevins Spur Road and a gas line extension on the Holland Garrett Road, both paid for by customers.

A request was received from a customer for reimbursement of $45 to bleed air and relight a gas furnace repeatedly. Dickson stated that it was an “unknown reason on our part,” Noting that the gas service was not interrupted due to repairs and they could find no reason for the air in the gas lines. Dickson further explained that when service is interrupted for repairs, a note is left on each customer’s door, and the gas is turned back on once the owner is home.

Council member Billy Jeffries stated, “I feel like we need to reimburse him for his money, but now we need to get something straight about whose responsibility it is if we do it. If there is something we’ve done, we need to take care of that.” In this situation, the council voted to reimburse the customer.

No bids were received for the water and gas meters, therefore, the council decided to re-bid due to cost limitations.

Wilson also reported that Walgreens, operating under the name Rite Aid had finally received their renewed alcohol license as of 10/31/18.

Edmonton Fire Chief Jerry Clemmons presented the total city fire runs for the month of October as 32. Broken down they are: 18 medical emergencies, 4 accidents with injuries, 4 fires, 2 accidents without injuries, 2 police assists, 1 alarm, and 1 special detail.

Parks Director Page Edwards reported that the parks have been winterized and to prevent further vandalism, deadbolt locks have been installed on the bathroom doors at Pedigo Park.

In preparation for the Edmonton Memorial Park Christmas Display, new patterns have been received and the Ag and Art Departments at the high school have agreed to help again his year.

After the ribbon cutting for the new rescue house in Edmonton, it was suggested that the house be given a name. Council member Nunn made the suggestion of ‘The Wallace Rescue House’ which was quickly seconded and approved. A photo of Gilbert and Ruby Wallace is also to be placed within the home.

The next regular scheduled meeting is December 3rd.