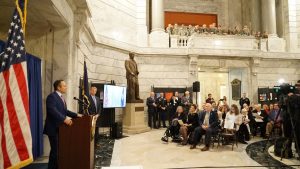 First Lieutenant Conner, of Clinton County, was posthumously awarded the Medal of Honor by President Donald Trump earlier this year for his heroic acts during World War II. Following the medal presentation by President Trump at the White House, Gov. Bevin ordered the State Capitol Rotunda plaque listing all of Kentucky’s Medal of Honor recipients to be re-engraved to include 1st Lt. Conner.

“It is a privilege today to unveil the Medal of Honor plaque bearing First Lieutenant Conner’s name,” said Gov. Bevin. “This plaque symbolizes not only Conner’s bravery and heroism during World War II, but his unwavering commitment to serving his battalion and his country. I hope that as Kentuckians visit the State Capitol and see this plaque, they will reflect upon Conner’s incredible valor and honor all those who have fought and sacrificed for our freedom.”

After unveiling the new Medal of Honor plaque at today’s ceremony, Gov. Bevin also presented Mrs. Conner with a gubernatorial proclamation and a Kentucky flag, which was flown over the State Capitol.

On Jan. 24, 1945, 1st Lt. Conner helped to singlehandedly repel the advance of six German tanks and 600 German infantrymen near Houssen, France. He directed artillery fire on the attacking force for three hours from a precariously exposed position. As a result of his actions, 1st Lt. Conner prevented heavy casualties in his own battalion and helped to turn back the Nazi advance.

Conner previously received four Silver Stars, one Bronze Star, three Purple Hearts, and the EAME Campaign Medal with seven Bronze Stars for his bravery in the European and Mediterranean theaters from 1943-1945.

Conner’s family worked with federal and state officials, veterans agencies and fellow service members for nearly two decades to advocate for the Medal of Honor distinction honoring Conner’s acts of valor during World War II. First Lieutenant Conner died in 1998, but the effort to recognize his heroism continued and finally succeeded this year.

The Medal of Honor is the highest award for valor in action against an enemy force which can be bestowed upon an individual serving in the United States Armed Services. For more information about the Medal of Honor, visit http://themedalofhonor.com.

First Lieutenant Conner’s Medal of Honor citation from the President of the United States reads:

The President of the United States of America, in the name of Congress, takes pride in presenting the Medal of Honor (Posthumously) to First Lieutenant Garlin Murl Conner for acts of gallantry and intrepidity while serving with Company K, 3d Battalion, 7th Infantry Regiment, 3d Infantry Division. On the morning of January 24, 1945, near the town of Houssen, France, German forces ferociously counterattacked the front left flank of the 7th Infantry Regiment with 600 infantry troops, six Mark VI tanks, and tank destroyers. Lieutenant Conner, having recently returned to his unit after recovering from a wound received in an earlier battle, was working as the Intelligence Officer in the 3d Battalion Command Post at the time of the attack. Understanding the devastating effect that the advancing enemy armor could have on the Battalion, Lieutenant Conner immediately volunteered to run straight into the heart of the enemy assault to get to a position from which he could direct friendly artillery on the advancing enemy forces. With complete disregard for his own safety, Lieutenant Conner maneuvered 400 yards through enemy artillery fire that destroyed trees in his path and rained shrapnel all around him, while unrolling telephone wire needed to communicate with the Battalion command post. Upon reaching the Battalion’s front line, he continued to move forward under the enemy assault to a position 30 yards in front of the defending United States forces, where he plunged into a shallow ditch that provided minimal protection from the advancing enemy’s heavy machine gun and small arms fire. With rounds impacting all around him, Lieutenant Conner calmly directed multiple fire missions, adjusting round after round of artillery from his prone position, until the enemy was forced to halt its advance and seek cover behind a nearby dike. For three hours, Lieutenant Conner remained in this compromised position, enduring the repeated onslaught of German infantry which, at one point, advanced to within five yards of his position. As German infantry regrouped and began to mass in an overwhelming assault, Lieutenant Conner ordered friendly artillery to concentrate directly on his own position, having resolved to die if necessary to destroy the enemy advance. Ignoring the friendly artillery shells blanketing his position and exploding mere feet from him, Lieutenant Conner continued to direct artillery fire on the enemy assault swarming around him until the German attack was finally broken. By his heroism and disregard for his own life, Lieutenant Conner stopped the enemy advance. The artillery he expertly directed, while under constant enemy fire, killed approximately fifty German soldiers and wounded an estimated one hundred more, preventing what would have undoubtedly been heavy friendly casualties. His actions are in keeping with the highest traditions of military service and reflect great credit upon himself, the 3d Infantry Division, and the United States Army.