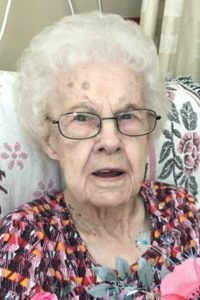 Hazel E. Davis, 103, of Glasgow, was called to her perfect Heavenly home on Thursday, November 8, 2018, where she joined many of her earthly family and loving friends. She was born May 21, 1915 at Rocky Hill to Charlie East and Blanche Lawrence East. She spent the majority of her adult life as a farming housewife, but in later years was employed by the Barren County Board of Education and worked at the original Red Cross Elementary School.

In addition to her parents, she was welcomed home by our Heavenly Father, her husband Herman Davis; brothers, Lindsey East and Wallace East; sisters, Mazie Gillespie, Lois Beckham, Beatrice Garmon, Virginia Renfrow and Marie Woodward; a grandson Russell Hawks and many other close relatives and friends. She was a kind and gentle lady and was a great inspiration to all that knew her. All her family and friends look forward to seeing her again.

The family would like to thank the friends and staff at Highland Ridge Assisted Living and NHC Healthcare for the care and concern shown her.

Funeral services will be 12:30 PM Monday, November 12th at the A. F. Crow & Son Funeral Home with burial in the Old Zion Cemetery. Visitation will be Sunday from 3pm until 8pmand Monday morning until time for the service.